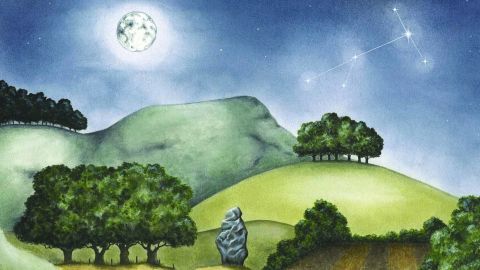 There are few greater delights than driving through the English countryside on a summer’s day with Big Big Train on full blast. Their music shines with full‑hearted fervour. Perhaps it was an awareness of this that led David Longdon, Greg Spawton and co to drop this unexpected delight around the summer solstice. ‘Unexpected’ since most of us were still reeling from the mythic magic of April’s Grimspound, the companion piece to the profound and gigantic Folklore.

Releasing album after album is typically a bad sign, but Big Big Train have torn up the rule book. …Brightest Star shines gloriously, casting light on the journey so far, guiding the listener into new territory and giving us all the melody, bombast and nostalgia we’ve grown to expect.

Thematically, this new offering is a grand farewell.

…Brightest Star brings together both previously unreleased tracks and reworked tunes from the last two albums. This latter section, Grimlore, concentrates on amplifying Folklore’s biggies, Brooklands and London Plane, with instrumentals and themes from Grimspound. The effect is mesmerising, allowing London Plane to achieve a shimmering vastness that had been partially concealed by the original’s musical decisions. If the Folklore version was like a taste of a Turner masterpiece, now you truly feel you’re out on the Thames Estuary with the Old Master, painting The Fighting Temeraire.

Big Big Train have said that …Brightest Star signals the end of a trajectory set off by The Underfall Yard in 2009. We’ve become familiar with their delight in an England just out of grasp, of butterflies and burial grounds and Liverpudlian forgers. Thematically, this new offering is a grand farewell. Skylon captures the excitement of the New Elizabethan age of space and post-war possibility, while the title track takes us deep into dreams of adventure and childhood wonder.

But there’s another reason to be excited. If Big Big Train’s recent albums have shown both their growing confidence in their own sound as well as a desire to explore the gifts of new additions like strings player and co-vocalist Rachel Hall, …Brightest Star holds clues to fresh possibilities. The Passing Widow blends the band’s characteristic gift for melody and sentiment with a confident simplicity. The chord sequences could be Britten or Butterworth writing classical folk songs. If nothing else, it shows how Big Big Train can create transporting music without any need for complication.

As they say goodbye to the latest phase of their evolution, this might just signal a way ahead. Either way, the journey so far has been astonishing and we say thank you for that. Here’s to the next step.