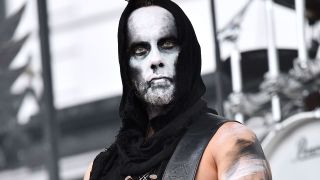 The vocalist and guitarist uploaded the images to Instagram Stories, with the front of the t-shirt design showing a figure pointing a gun at the back of a kneeling figure, while the back on the shirt says: “Kill them. Show no mercy. Fuck Antifa!”

The image sparked controversy on social media, with Darski then moving to explain his reasons for posting the images.

He says: “Some people got confused by this post. Well, when I make anti-government comments, it doesn’t mean I’m anti-Polish. It actually means I love Poland because I care about it.

“When I post someone wearing an anti-antifa shirt, it doesn’t make me a Nazi supporter. I’m concerned about damage they make to the scene. The ideals are OK, but the execution of them is utterly incompetent.

“Here comes the great paradox: Antifascist organisation being fascists themselves. Do you agree or…?”

It’s not the first time that the Behemoth leader has faced criticism. In October last year, he questioned whether any human could be truly good, saying: “There’s hipster in each one of you. This is going to be very controversial for some people, but I bet there’s Adolf Hitler in each one of you as well, maybe a little per cent. We are everything.”

Darski was also criticised in 2016 when a picture of him playing the role of a Nazi officer in 2013 film AmbaSSada surfaced. Those comments led Nergal to respond: "Well, well, well... I have a tendency to bash right-wing idiots for being idiots, but this is beyond stupid.

“I see there's plenty of brainless people on the left side of the barricade as well And now kids, why is a musician is wearing an SS uniform? Investigate and be surprised.”

Late last year, Darski issued a statement to Metal Sucks to respond to allegations of racism after he was photographed with Graveland’s Rob Darken while wearing a Bölzer shirt.

Graveland, who had their appearance at the Messe des Morts music festival in Montreal cancelled in 2016 after outcry from anti-fascist protestors, have been alleged to have ties with white supremacists.

Bölzer, meanwhile, have been accused of having national socialist ties – something that frontman Okoi Jones has denied.