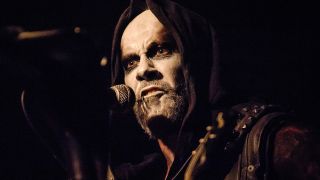 He’s never been afraid to air his controversial views, but Behemoth leader Adam ‘Nergal’ Darski may have just made his most contentious yet.

While speaking in the latest edition of the Metal Hammer podcast about the band’s new album I Loved You At Your Darkest and his love of hipster culture and coffee, he flipped the conversation on its head by remarking that he thinks everyone has a little bit of Adolf Hitler inside them.

He reports that when the band are out on tour, he always asks the local promoter where the nearest hipster area is because they’re “the coolest spots on earth” due to their coffee shops, craft beer bars, vinyl stores and theatres.

Nergal goes on: “Culturally, hipsters make the world evolve. Am I hipster myself? I don’t know because I try to run away from any definitions. People love to put stickers on your forehead, and my on forehead there’s a lot of space so I always get more than one. It’s cool.

“If it makes your life easier, it’s cool with me, but trust me, if I’m a hipster then fine, I’m a hipster and a billion other things at the same time.”

“I throw the card out and I do it because that’s what the complexity of human nature is all about. We’re very complex beings and you people, you bashers and accusers, you better learn that.”

You can listen to the full episode below or check it out here.