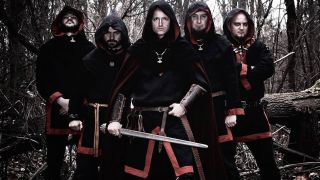 The Messe des Morts music festival in Montreal was called off last night following protests from anti-fascists concerned over the appearance of Polish outfit Graveland.

The band are alleged to have ties with white supremacists and were identified as a hate group by US non-profit organisation Southern Poverty Law Center in 1999. Germany banned the sale of four of Graveland’s albums in 2008 as they were “unsafe for youth.”

The Saturday night performance was billed as their first ever live show in North America – but protesters descended on the city’s Theatre Plaza on Saturday night to demand that Graveyard refrain from taking to the stage.

The angry protests forced festival organisers to pull the plug on the show.

They say in a statement: “For safety reasons, we are forced to cancel tonight’s concert. Know that the Theatre Plaza’s administration, as well as the Messe des Morts’ organisation have put every effort to find another conclusion.

“Despite this announcement, we invite you to go back home calmly and to show the same respect you have shown since the festivals’ debut.”

Prior to the festival taking place, the Montreal Gazette received an “anti-fascist alert” from Karine Fortier, who said: “Montreal must remain a safe place for everyone and where racist people who think they have an opening to express their discriminatory ideas must meet with resistance.

“It’s important that this concert not be held. Whether it’s the Theatre Plaza, that refuses to provide a place for racist bands, or the city of Montreal, that doesn’t want to welcome these bands. We can’t legitimise such ideas and above all we can’t give them a place to legitimise their ideas.”

The festival ran across three days, with artists including Ulcerate, Mgla and Aosoth performing over the weekend.