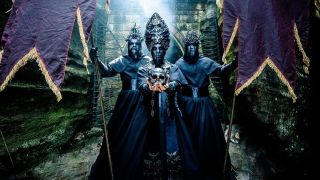 Behemoth have released a video for their new single Rom 5:8.

It’s the latest material taken from the band’s most recent studio album I Loved You At Your Darkest which was released in 2018.

Nergal and co. teamed up with production company Grupa 13 for the promo, with Behemoth explaining: ‘‘To celebrate the monumental start of the Slipknot European tour, we proudly present the official video for Rom 5:8. Ready your voices legions, we shall need them!"

Along with the tour with Slipknot, Behemoth will release a tour edition of I Loved You At Your Darkest on January 24.

Along with the original album, the new version will feature a four-track BBC Radio 1 session and the previously unreleased documentary Thou Darkest Art, which was recorded as the band unveiled their art exhibition in London last year.

Behemoth were also recently confirmed as one of the headliners for the UK’s Bloodstock Open Air which will take place in August next year.

Nergal and his Me And That Man project will launch their second album New Man, New Songs, Same Shit, Vol.1 on March 27 through Napalm Records.

Behemoth: Live At Maida Vale
Nergal and co will release a Tour Edition of their most recent album I Loved You At Your Darkest later this month, with this digital Maida Vale EP available to order separately.View Deal