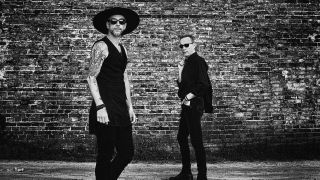 You’re unlikely to find a more unlikely musical union right now than Me And That Man. Adam ‘Nergal’ Darski is the heavily tattooed frontman with Polish satanic metal luminaries Behemoth, and a man who was once arrested for tearing up a bible on stage. His co-vocalist and guitarist John Porter is a 60-something ex-pat Brit who has spent almost 40 years carving out a career as a maverick singer-songwriter in Poland.

In the wrong hands it could have been a car-crash of styles, but the pair have managed to avoid that undignified fate. Instead, Me And That Man’s debut album, Songs Of Love And Death, mines a seam of gothic Americana that owes more to Nick Cave And The Bad Seeds and American Recordings-era Johnny Cash than it does to either of Darski or Porter’s day jobs.

“About ten or twelve years ago I thought: ‘I really see myself doing something completely different from Behemoth,’” says Nergal. “Covers of blues and country classics, that kind of thing. But I dropped the idea because I didn’t have the self-confidence. Now I do.”

Nergal had long been aware of West Midlands-born Porter’s work (“He’s a living legend in Poland”), but it was only when the Englishman signed to Mystic, Behemoth’s Polish label, that he realised he would be the ideal collaborator.

“He called me up and said: [deep, mock-satanic voice] ‘Would you like to meet me?’” remembers Porter, whose sardonic, lived-in vocals provided a glimmer of light next to his Nergal’s graveyard croak. “I was intrigued, cos he’s the enfant terrible of the Polish scene. We met in a Greek restaurant, and he says: ‘What do you think about doing something together?’”

Porter’s own music skirts close to what he’s doing with Me And That Man. But for Nergal, the bleached-bone twang of lead-off track My Church Is Black is a much more drastic departure from the musical ferocity and Grand Guignol spectacle of Behemoth. But beneath the dry surface, the two bands share a certain world view; ‘I cannot buy redemption riding down this perdition road/I have paved my way to hell,’ he sings on Better The Devil I Know. “Obviously it was never going to be funny, happy, mass-appeal music,” Nergal says “That darkness is just there.”

For now, neither of them are tying themselves to Me And That Man beyond this album and the forthcoming tour. Nergal says he relished the chance to spread his wings and challenge the more close-minded elements of Behemoth’s audience. And has working with Nergal given Porter a new appreciation of satanic death metal?

“Absolutely not,” says Porter. “I don’t like that music at all. But I respect somebody who has strived away for more than twenty years to get where he is. And not everybody rips up a bible on stage.”

“Mark Lanegan’s solo albums inspired us,” says Nergal. “His record Blues Funeral was one of the albums that helped me to make this music. And Nick Cave was a big influence. Let Love In and Push The Sky Away are my favourite albums of his. I saw him twice during this period and got a huge boost of inspiration from him.”

Watch Behemoth’s Nergal in Me And That Man video