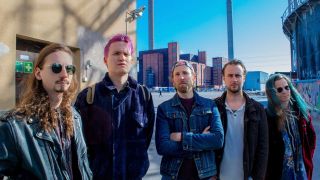 Atom Works will release their debut album The Life Of Spice on September 6 via Absolute Label Services, and have released a video for first single The Atom Dance. The album is available to pre-order now.

The Finnish proggers’ sound is inspired by the likes of Dream Theater, Fates Warning and Genesis, and their debut concept album is set on the Frontier Mail Train of 1934 India, spanning Bombay to Peshawar.

The band say: “The Atom Dance is the first single off of our debut album The Life Of Spice. The multifaceted track is part of the album's story, where three brothers try to get their hands on their father's supernatural abilities.

"The video was shot in two locations. A rugged desert and a lush paradise illustrates the life the brothers lead and the life that their father keeps away from them.”

Live dates will be announced soon. Check out the video for The Atom Dance below.