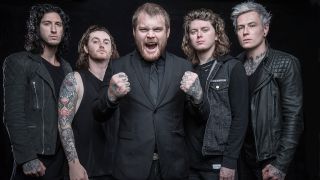 Speculation increased earlier this month when guitarist Ben Bruce reported he was in the studio, although he didn’t say anything about the project he was working on.

He’d previously confirmed that the follow-up to 2016’s The Black had been written and was “ready to be recorded properly.”

Now Good has posted an image of himself and Bruce leaning over a mixing desk, staring at a computer screen. He says: “Making important decisions.”

He’d previously posted a shot of drum microphones, and, referring to drummer James Cassells, said: “So stoked to use all these beautiful babies for Asking Alexandria drum tracking tomorrow. Day 1 of who knows ? Maybe James just kills the whole record first day!? Lol”

The album is set to feature vocalist Danny Worsnop, who returned to the band last year following their split with Denis Stoff – who’d taken Worsnop’s place in 2015.

Worsnop said earlier this year: “It’s great being back with the guys. It had been like two years since we had even spoken, so it was nice. It was like jumping back in – it was a smooth transition that I’m glad we did.

“I think we all needed the time apart to gather ourselves and get our respective shit together, and, yeah, it’s good to be back together.”