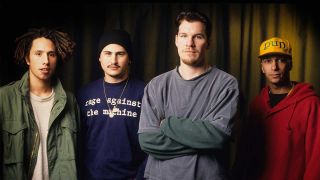 The Internet has tied itself up in knots following the publication of an Instagram post that suggests Rage Against The Machine are reuniting for a series of shows in 2020.

Just 24 hours after news broke that My Chemical Romance are reforming, a post on an unverified Rage Against The Machine Instagram account has listed five dates in Spring next year, beneath a photo that had also been been shared by RATM guitarist Tom Morello earlier in the week.

The photo showed protestors in the Chilean capital of Santiago, next to a message from Morello that read, "Chile is not messing around. USA NEXT?"

Now the RATM account – which has not previously posted any images – has shared the photo alongside five dates and cities. And a tweet from the fan-managed RATM twitter account, which is run with the band's blessing, has also shared the dates.

The two Indio dates coincide with the 2020 Coachella festival, which is located in the city.

There has been no official confirmation of the dates from RATM, although Forbes reports that longtime band associate Wayne Kamemoto – a music business manager who has worked with the likes of Cypress Hill – has confirmed that the social media posts are accurate.

Rage Against The Machine haven't played together since a show at the Los Angeles Coliseum in 2011, while Morello, drummer Brad Wilk and bassist Tim Commerford have been performing as Prophets Of Rage alongside Public Enemy's Chuck D and Cypress Hill's B-Real since 2016.