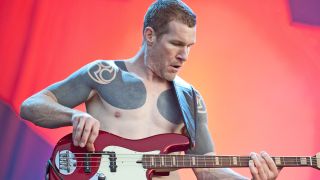 Hot on the heels of touring the world with both his political punk-rock band Wakrat and Prophets Of Rage, the rap-rock supergroup featuring members of Rage Against The Machine, Public Enemy and Cypress Hill, RATM bassist Tim Commerford joins us to pay tribute to the five bassists who first inspired him to pick up the instrument.

Tim: “I think he’s the greatest rock bassist ever. His technique on the bass is perfect for somebody who wants to learn how to play; if you watch him and you listen to those Rush bass lines, they’re amazing and his technique is amazing. If you emulate his technique, you’ll end up having great technique as a player. I was lucky, I tell people that all the time – so much of everything is luck; music, playing in a band, just the kind of music you listen to, and the type of players. There’s guys who have horrible technique but they’re in great bands, and you can be into that band and then as a kid emulate that player who has terrible technique, and then you’re going to have terrible technique, and technique is such an important part of being an artist. So, I emulated Geddy Lee as a kid coming up, and I benefitted from that on so many levels as a professional musician. I am so thankful for that.”

“Before [Geddy Lee] it was Sid Vicious. Sid Vicious was not exactly the greatest bass player in the world, but he was still such an inspiration to me to want to be a bass player, because I thought he was so fucking cool. It’s more than just music that inspired me to be a bass player, it was also what they did and what they said, and that was important to me too. I think Sex Pistols were the greatest punk rock band to ever live, that record that they made is one of those records I can listen to and still enjoy. There was a time in my life, when I was a child, where I was listening to that record – me and Zack de la Rocha both grew up together, we would listen to that record and just love it, and that’s how I learned how to play bass guitar, because of Zack. He played guitar and he played every song on that Never Mind The Bollocks record and he was the one that said ‘Hey, man, you could play bass’, and he set me off on the path that I’m still on today – and it’s all because of the Sex Pistols.”

“Jaco Pastorius the greatest bass player of all time. Again, to technique, it’s like the greatest bass player has the greatest pulse – there’s a certain pulse that you have, and everyone’s got a different pulse, and we all hear music as that pulse that people have. Some people hear a faster pulse, and he was on the highest, fastest pulse. It’s kinda like John Coltrane – he was on the fastest pulse, I don’t think anyone’s come along since Coltrane that has been able to take his instrument to a higher level. The same goes for Jaco. He took the instrument to the highest level, and nobody’s raised that benchmark.”

“Louis Johnson is just funk. It’s just pure funk. Bass is such a funky instrument, and funk is for me, again it’s one of those elements of Rage Against The Machine, and what I do, that I think sets us aside from other people who have come along and tried to emulate it. It’s funky, and the bass is a funky instrument, and he’s arguably the funkiest bass player of all time.”

“I think the Bad Brains, post-Sex Pistols, musically they are the greatest punk/rock/reggae – I don’t know what category you would put them in [laughs] – but they are the greatest, in my opinion, since the Sex Pistols. Darryl had a unique style of playing, a lot of power chords on the bass, and things that he inspired me to want to do. It’s hard for me to put my finger on exactly what I think’s great about him. He’s a very signature player, that when I hear him, I recognise his uniqueness. I was as inspired by him just as much as everyone else.”

Wakrat’s self-titled album is out now through Earache.

Donald Trump is Adolf Hitler, by Rage Against The Machine’s Tim Commerford