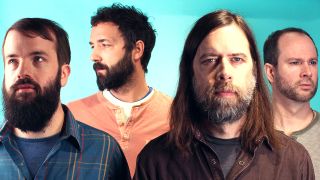 US folk prog quartet Abouretum have streamed their new single A Prism In Reverse. The song is taken from the band's forthcoming new album Let All In which will be released through Thrill Jockey records on March 20. You can listen to A Prism In Reverse below.

Let All In in is the band's tenth studio album, and their first for three years, following on from 2017's Song Of The Rose. The new album continues to mix the band's trademark English folk and psychedelia with Americana and country blues.

Let All In was recorded at Wrightway Studios in the band's hometown of Baltimore with Steve Wright and features guest appearances from pianist Hans Chew and David Bergander from psychedelic band Celebration.