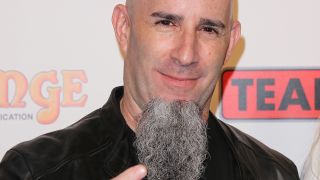 Scott Ian says his whole life has been leading up to flying in Iron Maiden’s private plane.

Anthrax will jet across South America with Maiden next month on the metal band’s The Book Of Souls World tour.

Despite knowing about the plan for months, guitarist Ian says that reality only hit him after he watched a video of Maiden frontman Bruce Dickinson landing Ed Force One in Florida.

Ian tells TeamRock: “We’re actually flying on a Boeing 747 that says Iron Maiden on the side – with Iron Maiden. I finally understand what I’ve been doing all this time. It’s all been leading up to this.

“I saw Maiden support Priest on the Killers tour in 1981 in New York, and 35 years later I’m flying on a jet with them.”

Ian’s looking forward to playing in front of 75,000 people in Santiago, Chile, in March, but says seeing Iron Maiden perform will be an amazing experience.

He adds: “I’ve always wanted to do that as a fan, see Maiden in South America. Ask any band where their best gig is, and they’ll say Chile, Argentina or Brazil. It’s so insane down there.

“From a fan’s point of view, you get to see Maiden in front of those crowds. Even if I wasn’t playing the gigs, just to be a fly on the wall on the plane and get to go to the shows would be enough for me. I’m very excited.”

Maiden are currently on tour in support of 2015 album The Book Of Souls in North America. Anthrax will join them in South America to promote their latest record, For All Kings – out on February 26.