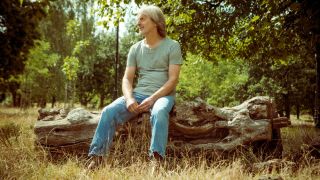 Anthony Phillips has announced that the release of five-disc anthology Harvest Of The Heart has been delayed.

Originally set for launch on October 27, it includes 10 previously unreleased tracks alongside material from throughout the Genesis co-founder’s career from 1969 until the present. It’s described as “a definitive overview of Ant’s career as a recording artist.”

Phillips reports: “We’ve received confirmation today that due to manufacturing issues, the release date has been revised slightly to 10th November. Copies pre-ordered directly from Cherry Red are likely to despatch before this date.”

He recently revealed that his deal with Cherry Red will include the release of new material, saying: “Their enthusiasm has been both warm and infectious, encouraging me to take the plunge with a song-based album soon.”

Harvest Of The Heart features a total of 90 tracks. The unheard numbers – City Of Light, Nightjar, Slow Roller, Imperium, A Simple Truth, Vespertine, Forget-Me-Not, The Storm Of Windhover, Pas De Deux and Ringer – all appear on the fifth disc. Pre-ordered copies will be signed by Phillips.