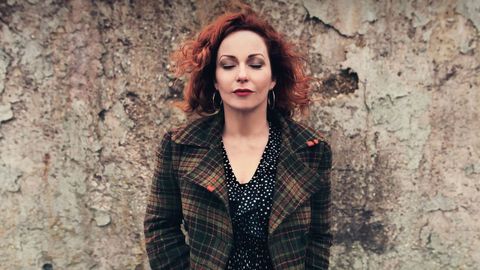 Such is the elegant wonder of Anneke van Giersbergen’s voice, she could sing any old bollocks and discerning music fans would still find themselves a mess of goosebumps and tears.

Thankfully, when embarking on a solo career after leaving The Gathering in 2007, she insisted on a level of quality and distinction in her own work that has made her subsequent evolution as an artist – whether operating under her own name or in collaboration with any number of Devins and Arjens – such a consistent joy.

Day After Yesterday comprises the complete recordings Anneke made while working under her post-Gathering handle of Agua de Annique. Perhaps the most important thing to note about this lavish set is that the albums contained within – debut Air, the primarily acoustic Pure Air and mischievously poppy In Your Room – received scant acclaim at the time but are every bit as enthralling as the more recent (and more widely heard) Everything Is Changing and Drive. While those albums were arguably more focused and streamlined than their predecessors, the Agua de Annique years offered a similar level of melodic refinement and atmospheric diversity, plus countless instances of that voice reaching sublime heights.

For prog diehards, Air is probably the most enticing entry point, with its delicate nods to The Gathering’s breezy melodrama and an underlying sense that Anneke was undergoing evolution in real time. The dark bliss of Beautiful One and the elegiac reverie of Lost And Found are gorgeous.

Pure Air revisits the album, alongside numerous duets and collaborations, most notably with Anathema’s Danny Cavanagh on a breathtaking reading of Damien Rice’s The Blower’s Daughter and John Wetton on a suitably dreamy take on Wetton/Downes tune To Catch A Thief. Depending on how susceptible you are to Christmassy sentimentality, the closing version of Frankie Goes To Hollywood’s The Power Of Love is so angelic and heart-rending it makes the original sound like Napalm Death, and may just leave you blubbering like an overtired toddler. Again, that voice is irresistible.

Meanwhile, In Your Room is Anneke’s most overtly pop-orientated album, but even within its chirpy refrains and airy arrangements, that underlying enthusiasm for subtle experimentation shines through.

Topped off with a bonus album of live material – and yes, the voice is glorious away from the studio too – Day After Tomorrow reaffirms that Anneke is a free spirit with an exquisite gift for conveying simple emotions via the medium of lovingly crafted and elegantly performed songs.