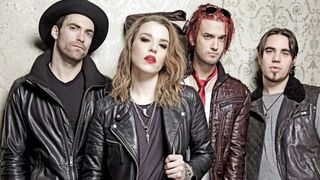 Halestorm will cover songs by Metallica, Soundgarden, Twenty One Pilots and Whitesnake on their new EP.

Lzzy Hale and co will release their third EP of covers, called Reanimate 3: The Covers EP, on January 6 via Atlantic Records. It’s available for pre-order now, with Halestorm’s version of Whitesnake track Still Of The Night on offer as an instant download.

As well as the Whitesnake track, the EP sees Halestorm cover Ride The Lightning by Metallica, Fell On Black Days by Soundgarden, Heathens by Twenty One Pilots, I Hate Myself For Loving You by Joan Jett & The Blackhearts and Damn I Wish I Was Your Lover by Sophie B Hawkins.

Lzzy Hale says: “We are so excited to finally unleash our latest cover EP, Reanimate 3. On this EP we were inspired to push the limits and challenge the ears of our fans.

“There are some surprises that you may not have expected from us, and there are also things that you’ve always wanted to hear from us.

“We were so incredibly honoured to work alongside producer Nick Raskulinecz. He truly helped us bring these songs to life and find a way to make them Halestorm’s.”

The release follows on from previous covers EPs, 2011’s Reanimate and 2013’s Reanimate 2.

Halestorm recently issued their Christmas single, a cover of AC/DC’s Mistress For Christmas.