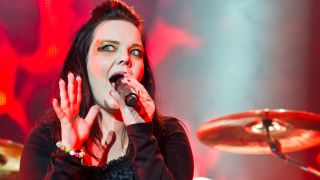 Former Nightwish singer Anette Olzon has split with her record label just months after the release of her debut solo album.

Asked if she planned any new releases, Olzen replied: “I actually don’t know that since I have decided to part ways with my record label and go on my own.

“So lets see when and how I will release something. Probably will release most stuff only in the internet and iTunes and so on since album sales are so bad nowadays.”

She also revealed that she plans to record tracks with her former Alyson Avenue bandmate Niclas Olsson.

She said: “I am sure I will record more rocky songs too, even if it won’t be under my name. I am planning to make some songs with my former band mate Niclas, so lets see how that turns out.”

Olzen was replaced by Floor Jansen in Nightwish and earlier this year she said she objected to Jansen temporarily filling in for her when she fell pregnant as she believed it would lead to her being fired.