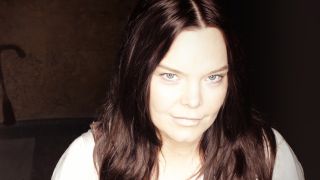 Anette Olzon has revealed she rejected the idea of having Floor Jansen stand in as Nightwish singer because she believed it would lead to her dismissal.

The argument arose when she asked for an Australian tour to be postponed during her pregnancy in 2012. Mainman Tuomas Holopainen suggested that Jansen should front the band on a temporary basis, but Olzon said no.

And that led to her sacking later in the year, with Jansen announced as stand-in, and later confirmed as permanent replacement.

Olzon tells BraveWords: “I would have been too pregnant to go to Australia so I wanted to push the dates back, but Tuomas didn’t want that. Discussions about a substitute came up, and at first I was like, ‘Yeah, well, okay.’

“But when they mentioned Floor it was an automatic ‘no’ from me. I didn’t think it was a good idea because I knew what would happen – I knew the fans would love Floor because she’s a metal singer and I’m a pop singer, and I wanted to keep my job.”

Olzon had already experienced a difficult time with Nightwish fans after being hired to replace Tarja Turunen, who was fired in 2005.

She says: “I received a lot of hatred against my voice and my persona. If I had been Tarja, I wouldn’t have been nervous about having Floor step in because I’d know the fans would wait for me. They would have been saying ‘We want Tarja back.’

“If I’d agreed to Floor coming in I would end up thinking ‘This whole thing again?’ when I came back. I could see what would happen.”

Olzon is preparing to tour in support of her debut solo album Shine, launched last month – but she vows she’ll never perform a Nightwish song at any of her shows.

The vocalist says: “Tuomas is quite disturbed that Tarja is singing some of his songs, so out of respect I’m not going to do that. They’re his songs, and Floor is singing them now.

“I also don’t be a Nightwish singer for the rest of my life – because they have a new one.”