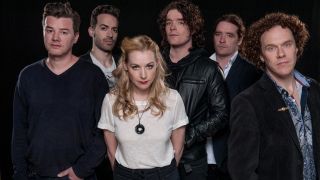 Their concert at Liverpool Cathedral in March was filmed under direction from Lasse Hoile, while the audio was produced by Christer-Andre Cederberg who worked with the band on Distant Satellites, Universal and Weather Systems.

An additional 5.1 audio mix was engineered by The Pineapple Thief mastermind Bruce Soord.

Mainman Vincent Cavanagh says: “I’m really happy that this night in particular has been preserved. As anyone from Liverpool will tell you, to be given the chance to play the Anglican Cathedral is monumental and a huge honour.”

A Sort Of Homecoming will be issued as a four-disc box set containing a concert DVD, double-CD and additional DVD with behind-the-scenes film A Temporary Peace. It’ll also be released on 2CD/DVD, Blu-ray, digital and pressed on triple 180g vinyl. Pre-orders are now being taken via Kscope’s online store.

Anathema are currently on tour and will join Yes, Marillion and more on the Yes’s Cruise To The Edge in November.

A Sort Of Homecoming tracklist