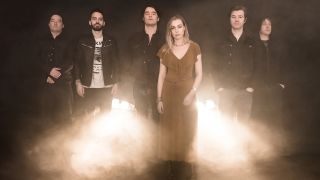 Anathema have announced that Rendezvous Point and Cynic guitarist Paul Masvidal will support them on their forthcoming European tour to celebrate the tenth anniversary of We're Here Because We're Here.

Meanwhile Cynic guitarist Masvidal appears as a solo artist, having just released a trilogy of albums, Mythical, Human and Vessel. A new Cynic album is slated for release later this year.

Speaking of the tour, Anathema singer Vincent Cavanagh says: "The plan is to do two sets: the We’re Here Because We’re Here album in full and then a second set comprising the best stuff from the other records and maybe a brand new song or two. it has been almost 10 years, I’m really into the idea of this tour from a creative perspective.

"How will we play these songs live now? How will some songs have evolved in the meantime? What can we do with the visual production? It’s a great record to revisit as the themes are still as honest and personal as they’ve always been but there are more shafts of light that cut through the darkness."