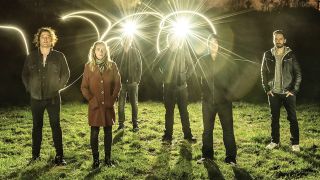 Anathema have been added to the Sunday line-up at this year’s Stone Free festival at the O2 on June 17.

The current prog cover stars will join Yes feat. Anderson Rabin Wakeman, Roger Hodgson and Joanna Shaw Taylor for the proggier day of the two-fay event. Scorpions and Megadeth have been announced for the Saturday, and they have been joined by Buckcherry in the main arena.

Orange Goblin, Stonebroken, The Picturebooks and Triggerfinger will all appear at the Indigo At The O2 on the Saturday, and Richie Kotzen, Tyketto and Ginger Wildheart will appear on the Sunday. The Big Entrance stage will host Aaron Buchanen, Daxx And Roxanne, Dirty Thrills and Anchor Lane, whilst the Speakeasy spoken word stage will feature Abigoliah Schauman, Fin Taylor, Glenn Wool, Chris Betts and Becs Hill. The evnt alos hosts a VIP Record Fair, Beer Garden and Cinema over the weekend.

Ticket information and VIP Package details are available from the Stone Free website.