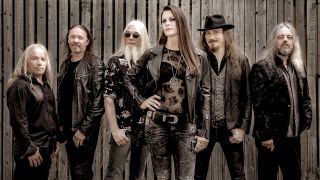 A new species of crab has been discovered and named Tanidromites nightwishorum in honour of Nightwish.

The band have called the namecheck a “truly fantastic honour” and have even made a statement about the discovery.

The band say: “One new crab species was named after us in honour in particular for our 2015 album Endless Forms Most Beautiful about the evolution of life.

“The new species of crab was found in eastern Austria and lived during the late part of the Jurassic period – around 150 million years ago. While dinosaurs dominated the land, parts of Europe were covered by a warm, shallow sea full of life.

“Tanidromites nightwishorum was discovered in a fossil coral reef. Crab diversity and abundance exploded for the very first time in their evolutionary history during the Late Jurassic in central Europe.

“Thanks to Dr Adiel A. Klompmaker and his colleagues for this truly fantastic honour. Adiel is curator of palaeontology at the Alabama Museum Of Natural History.”

The scientific paper about the discovery has also been published, with Nightwish the latest artist to be have a species named after them.

Pink Floyd have a pistol shrimp named in their honour, Cannibal Corpse bassist Alex Webster has an extinct monster worm named after him since “he can be regarded as a ‘giant’ when it comes to handling his instrument,” and Lemmy’s name is now attached to a Jurassic crocodile fossil.

Henry Rollins, meanwhile, has a fireworm named after him because it was a “muscly beast.”