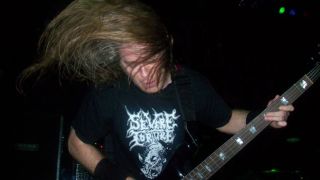 A previously undiscovered species of primordial giant worm has been named in honour of Cannibal Corpse bassist Alex Webster.

The 400 million year old fossil of the snake-like monster was discovered by researchers from the University Of Bristol, Sweden’s Lund University and the Royal Ontario Museum. It had been stored at the Canadian museum since the mid-90s.

Science Daily reports that the giant eunicid species, also known as ‘Bobbit worms’ are known for their powerful jaws, with Lund University’s Mats Eriksson naming the worm Websteroprion armstrongi since “he can be regarded as a ‘giant’ when it comes to handling his instrument.”

Bristol University’s Luke Parry adds: “This is fitting also since, beside our appetite for evolution and paleontology, all three authors have a profound interest in music and are keen hobby musicians.”

Every Cannibal Corpse album ranked from worst to best