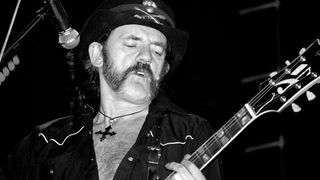 Scientists have honoured late Motorhead frontman Lemmy by naming a fossil of a crocodile after him.

Named Lemmysuchus – a direct translation of ‘Lemmy’s crocodile,’ the 5.8 meter long beast was a sea-going member of a group of teleosaurs which were common during the Jurassic Period and is distantly related to today’s crocs.

The fossil was discovered in the early 20th century and was recently studied by Michela Johnson, a palaeontology PhD student at the University Of Edinburgh. She revealed that the specimen had been incorrectly classified and, as a result, needed a new name.

Natural History Museum curator Lorna Steel is a Motorhead fan and suggested that the fossil should be named after her musical hero.

Steel says: “Although Lemmy passed away at the end of 2015, we’d like to think that he would have raised a glass to Lemmysuchus – one of the nastiest sea creatures to have ever inhabited the Earth.

“As a longstanding Motorhead fan, I am thrilled to have had the opportunity to immortalise the rock star in this way.”

View an artist’s impression of Lemmysuchus below.

Other artists to have fossils and creatures named after them include Pink Floyd, King Diamond and Cannibal Corpse, who had an extinct monster worm named after bassist Alex Webster earlier this year.