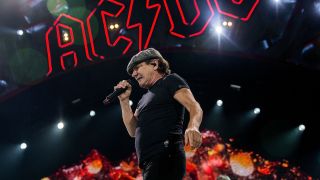 Asius’ Chief Scientist Stephen Ambrose previously met with Johnson after the singer was ordered to stop touring with AC/DC or risk permanently losing his hearing. And the 68-year-old vocalist said he was “moved and amazed” by the technology Asius are developing.

As the Colorado-based company prepares to launch a crowdfunding campaign to attract backers for their next generation of earbuds and in-ear monitors, they are also set to meet up with Johnson again and have him test a new prototype that they say could have him back on stage in the near future.

Ambrose tells TeamRock: “I wouldn’t be surprised if we have something that Brian, and other people, can use to return to the stage without any threat of damage to his hearing within the next six to 12 months.

“I will endeavour to kick up the development of the technology another 10 notches, at which point I expect to get the green light from Brian’s doctors to test the prototype with him.

“We need to know he can test it without further damaging his hearing. And I expect those tests will go very successfully.”

Johnson’s place in AC/DC was filled by Guns N’ Roses frontman Axl Rose who sang with the band on their remaining Rock Or Bust tour dates.

Since Ambrose first met Johnson earlier this year, Asius have worked with various funders to develop the latest in Ambrose’s patented ADEL range of earbuds – and they’ve turned a six-inch-square prototype into a 10mm version that can sit comfortably behind the ear. The device allows 14-band EQ control in each ear, programmed via computer or smartphone app.

A comparison between the early version and the latest prototype can be viewed in the images below.

While the benefits for musicians are clear, Ambrose says the technology will change the lives of many people around the world with hearing problems.

He reports: “Having Brian Johnson involved has helped us get the support of a lot of major companies – support that wouldn’t have been there without him.

“Brian was excited by the technology and he said it worked. He said he just couldn’t wait to test a ‘miniaturised’ version of the prototype – and now we’re almost ready to test that with him.

“Brian is not just doing this for himself but for everyone else who needs help. We aim to make our technology available at a price point that people can afford.”

Ambrose’s technology uses an ”inflatable bubble” design that gets around the problem caused by traditional earbuds, which seal the ear canal and increase potentially dangerous vibrations on the eardrum. The system essentially adds a second eardrum to receive sound pressure, delivering a clearer, crisper sound without having to increase volume.

Ambrose continues: “Brian has been off racing his cars in Europe since we last met up, but we’ve been in regular contact via email. He is due back in the US soon and we will be able to start the tests.

“Brian has been speaking to people like racing driver Stirling Moss and Sting, among other people. They are all just waiting to hear about Brian’s experience with the next version of the prototype.”

Details of Asius’ upcoming crowdfunding drive will be revealed towards the end of October.