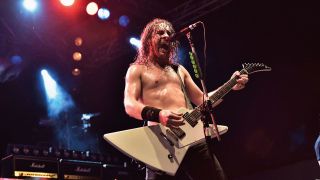 “I do a lot of shit that I don’t know if it’s illegal or not. I tried to steal a mate’s car when I was drunk once. But I started driving backwards and before I had the chance to drive away with it I was thrown out of the car.”

“The most metal album I own is Kill ’Em All by Metallica. I bought it on cassette tape when I was a kid and I must’ve played it over and over again. We used to have a cabin in the backyard of the house we grew up in Warrnambool and I climbed up on the roof one day with my parents’ record player and speakers. When Jump In The Fire came on, I jumped off the roof and fucked up my ankle. It’s still fucked to this day.”

“I’ve never broken any bones, touch wood. The worst thing I’ve ever done was in Amsterdam. We went to the Hard Rock Café and the guys behind the bar recognised us, so they said we could have any drinks we wanted for free. We ended up drinking pints of beer with double shots of Jack in each one and I walked out of there pissed as a maggot. Then I went to cross the road and somehow tore all the ligaments in my foot – the same foot that I fucked up jumping off the roof to Jump In The Fire. And this was at the start of the tour. I would’ve loved to have done an Axl Rose or a Dave Grohl but we didn’t have time to make a chair, so I just took a load of painkillers every day and hopped on one leg at every show. It got to the point where I started shitting blood. Bad times.”

“Well, we went to see George Thorogood in Texas one night and we got really excited because George had invited us back to his tour bus. He’s a big hero of mine – fucking Bad To The Bone, man, he’s the king. We were so amped up, so afterwards we went out to this bar where we met these three Mexican chicks and we started drinking rounds of tequila with them. Now, Mexicans can drink that stuff and be fine. But we’re Aussies – we drink beer and scotch and that’s it. The next day I couldn’t even move. I was lying in my hotel room screaming for help and someone came in and put me in the bath, where I lay vomiting and pissing on myself for ages. They then picked me up and put me in the back of the van with a bucket, and we drove eight hours through Texas with no air conditioning. I threw up all the way to the next gig.”

“Let me think… I’ve eaten something like an octopus’s head for a dare before, but I was so paralytic and blind I can’t remember what the fuck it was.”

“Yesterday, during a gig! Just the fingers on the strings, though.”

“That was probably with my brother, Ryan. But even though we wanna kill each other all the time we’ve still got each other’s backs.”

“At Ramblin’ Man Fair I was given a vintage Whitesnake Live At Donington t-shirt. An Airbourne fan literally took it off his back and gave it to me. That would be the rarest piece.”

Show us the most metal picture on your phone…