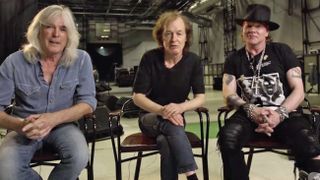 Axl Rose has appeared with AC/DC for the first time in an official capacity as part of a video promoting his debut show with the band.

The Guns N’ Roses frontman will play his first show with AC/DC in Lisbon, Portugal, on May 7 (Saturday) after he was confirmed as their guest vocalist for the remainder of their Rock Or Bust tour.

Rose was brought in after Brian Johnson was ordered to stop touring or risk going deaf.

In the video, guitarist Angus Young says: “Lisbon here we come. We’re really excited to be here in Portugal. We’re here to give you a great rock show and we hope to see you all there.”

Earlier, Rose told the NME: “It’s a challenge, and I wanna do right by the band and the fans.”

Rose was given the job after a series of auditions in Atlanta, Georgia, in March. They made the official announcement last month.

This week AC/DC revealed they took the decision to offer ticket refunds on the Axl shows to “do right by their fans.”

Why Brian Johnson deserves better, by his friend Jim Breuer