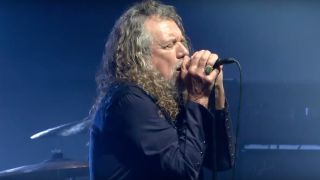 A cryptic message on Robert Plant’s website has sparked online rumours that Led Zeppelin could reunite.

And while Plant has distanced himself from further reunions taking place in the past, that hasn’t stopped the rumours that something is happening behind the scenes, after he posted the message “Any time now…” on the front page of his website.

The vocalist is thought to be working on a new album with The Sensational Space Shifters, so the message could be referring to that.

But Feel Numb report that “well placed sources” have told them that Zeppelin will get back together for Desert Trip 2017, saying it’s being planned to coincide with the Led Zeppelin’s 50th anniversary.

The festival is due to take place in Indio, California, in October. Last year’s event featured the Rolling Stones, Bob Dylan, Paul McCartney, Neil Young, the Who and Roger Waters.