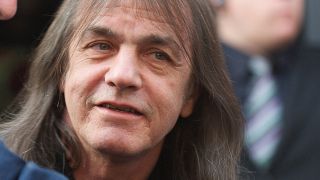 Malcolm Young retired from AC/DC as a result of dementia, his family have confirmed.

It follows recent speculation that the 61-year-old mainman and rhythm guitarist’s health had forced him into 24-hour care in a nursing home.

The Aussie giants last week announced the launch of Rock Or Bust, their first album without him, on December 1. He’s been replaced by nephew Stevie Young, who’ll join the band on their 2015 world tour – also rumoured to be their last.

A brief statement to the People says: “Malcolm is suffering from dementia and the family thanks you for respecting their privacy.”

Last week the Sydney Morning Herald quoted a source as saying: “If you were in the room with him and walked out, then came back in one minute later, he wouldn’t remember who you are. He has a complete loss of short-term memory.”

On the announcement of their 16th album, AC/DC’s label said: “Unfortunately, due to the nature of Malcolm’s condition, he will not be returning to the band.”

Dementia is a brain disease that appears in a number of forms, causing loss of memory and thinking functions, and leading to loss of body control. The most common variant is Alzheimer’s disease, which accounts for three-quarters of all cases. Very few forms of the condition can be cured.