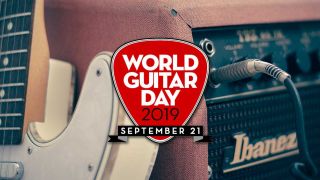 Jimmy Page may have played a Fender Telecaster on Stairway To Heaven's famous solo, but it's difficult to imagine the Led Zeppelin man with anything but that iconic, low-slung Les Paul, just as it's impossible to imagine Jimi Hendrix gracefully wrangling anything but a Strat.

These are just two of the players who've helped build rock'n'roll, and while it's the songs that get passed down the years, those instruments are just as an important part of the tale.

The Fenders. The Gibsons. The Rickenbackers. The Jacksons. The Gretsches.

For World Guitar Day 2019, we’ve gathered together our Guitars That Built Rock’n’Roll series into one handy page. It’s the stories of the world’s great guitars, the companies that made them, and those who played them.