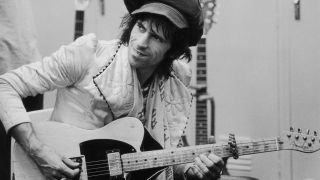 As you’ll no doubt recall, Classic Rock recently crowned Jimmy Page’s solo on Led Zeppelin’s Stairway To Heaven as the greatest of all time. By now, you should also know - cos we’ve told you often enough - that the guitar old Pagey brandished during that brief burst of pentatonic genius was a ‘59 Fender Telecaster, not the ‘59/‘60 Les Paul Standard that has become his trademark.

Here’s Jimmy play his ‘59 “Stairway” Telecaster (aka the “Dragon” guitar) with The Yardbirds on a pre-Led Zeppelin version of Dazed & Confused.

By the late 60s, when Jimmy was still having his wicked way with his ‘59, the Telecaster was the old man of electric guitars. It’s roots lie in the “snake head” prototypes made by engineer and inventor Leo Fender in Fullerton, California in 1949. When employees Don Randall and Charles Hayes unveiled Fender’s first solidbody electric guitar at a trade fair in Chicago a year later in 1950, they almost got themselves laughed out of town. Their boss Leo had taken the design of his existing lap steel guitars and expanded it into a full scale six-string with a thin single cutaway pine body and a bolt-on maple neck.

This was innovative as hell. Compared to existing guitars (pretty much all hollow body jazz boxes) this new guitar was like someone driving a Cadillac through the streets of Ancient Rome. To the assembled gawkers at that show in Chicago however, it was a gimmick… at best a “plank” or as one wag put it, “a toilet seat with strings…”

The first model available in the 1950 Fender brochure was the single pickup Esquire, then came the two-pickup Broadcaster. And the latter guitar would have kept its name had it not been for those pesky troublemakers at Gretsch. The New York based company griped that the name was too close to its existing Broadkaster drum set. While Leo and the boys wracked their brains for another name, they snipped the “Broadcaster” bit off their headstock decals [Leo wasted nothing] and sold the two-pickup guitar with just the Fender logo and no model name. These highly-prized guitars were later christened “Nocasters” by collectors. Eventually, Fender settled on the name “Telecaster” for their toilet seat with strings and the rest is the story of the most influential, important and versatile electric guitar ever made.

Leo Fender was not a guitar player. He designed the Esquire/Telecaster guitars as a solution to problems faced by guitarists. Unlike the typical, big bodied jazz models that were the order of the day, the Tele was compact wth a solid body - early models had Pine chassis before Alder, Poplar, Ash and Swamp Ash became more commonplace. It’s thought that Leo made the earliest guitars from Pine simply because he had a lot of the timber to hand. He used it to build amplifiers. Like we said, Leo was not a wasteful man. The solid body did away with the annoying feedback that plagued big hollow guitars. First round to Leo…

In the early 50s, Fender’s regular customers were country musicians. It was thanks to one of these guys, arguably the greatest electric guitarist that ever lived, that the guitar that became the Telecaster lost its novelty tag and became a serious contender. Jimmy Bryant was the prototype shredder, a hugely respected fiddler and guitarist who possessed super precise, blistering speed, without the cover of distortion. Bryant loved the new guitar’s fat bolt-on neck - designed so that it could easily be replaced if damaged - the sustain of the solid body, and the tones offered by the bright-sounding singlecoil pickups combined with the maple fingerboard. He was likely the first man ever to record with a Tele and is still jaw-dropping on his performance with steel guitarist Speedy West on the massively-influential Stratosphere Boogie.

While it can handle anything, the Telecaster is the undisputed king of electric guitars in Nashville played by countless session aces like Johnny Hiland and Brent Mason, and icons like Waylon Jennings, Merle Haggard (and his sidemen Roy Nichols and Redd Volkeart) and current keeper of the country flame, Marty Stuart. The guitar’s bright sound is pedal steel like, as opposed to the “glassier” voice of a Stratocaster.

Beyond Nashville, the Tele is the heartbeat of 60s Memphis soul thanks to Steve “The Colonel” Cropper of Stax and Booker T & The MGs; pop and indie, in the hands of Chrissie Hynde, Graham Coxon of Blur and Radiohead’s Jonny Greenwood; and metal under the grip of John 5 and Slipknot and Stone Sour man Jim Root, both privileged with modified humbucker-loaded signature Fender Teles.

Its younger sibling, the Stratocaster, is arguably prettier but the Telecaster is the ultimate tone machine. In continuous production since 1950, when it was still the Broadcaster, it’s never really been in or out of fashion. It’s almost impossible to break - although Pete Townshend had a right good pop at one in ‘65 - and punches through a mix like Rocky Balboa. And yes Jimmy, it fuelled the greatest guitar solo of all time. But, if you’re asking us to pick the most beautiful piece of music ever played on a Tele, well, it’s something that couldn’t have flowed from any other guitar. Here’s the late Roy Buchanan coaxing the sweetest tone imaginable from “Nancy” on his instrumental version of the country standard Sweet Dreams.