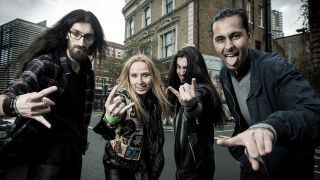 2019 has been a bumper year for the global metal community. You need only recently look around the fields of England – or any European festival with a canny booking policy on metal acts for that matter – to see that countries right across the globe have provided a wealth of musical diversity to enjoy.

Download Festival alone saw the masses pack out tents for the likes of Ukranian hellions Jinjer, Mongolian folk newcomers The HU (their crowd surrounding the tent some 20 people deep) and Nepalese headbangers Underside. Hell, even Glastonbury got in on the action, booking Japanese sensation Babymetal for the Other Stage (and pulling a massive crowd in the process). And that’s to say nothing of the first ever World Metal Congress – an ambitious international event set up by ex-Hammer Editor-In-Chief, Alexander Milas, which held its inaugural event earlier this year.

“The reaction to World Metal Congress blew my mind,” admits Alexander. “It started as a small event centred around a belief and ended with everyone from the BBC to the Wall Street Journal coming down to see what we were doing. We had people from Nepal, Syria, Iraq; we had LGBTQ representatives, we addressed feminist issues and it was wonderful because it began to take a life of its own.”

Alexander’s tenure with Hammer set a precedent for championing the global scene, something carried forward to current issues with in-depth coverage of everything from the censorship of metal in Indonesia to the triumphs of bands from the Middle East (including last year’s Golden Gods Global Metal Award winners, Lebanon’s Kaoteon). But he is quick to admit that simply coming from a novel location isn’t enough to earn a band recognition.

“You have to get away from this hegemonic position that’s almost patting somebody on the head for being different,” explains Alexander. “When [ex-label Senior VP] Monte Conner signed Sepultura to Roadrunner [in the late 80s], he wasn’t thinking of the global impact on the scene – he was signing somebody who he thought were gonna kick ass and sell records.”

Metal in 2019 is a vibrant and vital force, powered by voices from every nation and inclination on the planet. In turn, this has allowed the idea of cookie-cutter scenes to slowly slump off into the night, replaced by an eager breed of musician whose individual identity feeds into wider metal culture. On a global scale you can now find black metal in shades covering everything from Israeli to Icelandic, while the expansion of folk metal is allowing everyone from Korpiklaani to The HU to explore and celebrate their cultural heritage within the framework of creating great music.

“Metal is almost like an alien DNA that is hybridising with literally anything else,” says Alexander. “That’s how it has been able to survive for 50+ years; it can adapt, change and evolve and there’s still so much to discover. It is its own ecosystem in keeping with the working class community values that birthed metal in the first place, always asking, ‘Are we being included as much as we want?’”

Voices in modern metal come in many shapes and sizes. Whether looking at Russian/Welsh act Venom Prison as the brightest hope of British extreme metal, the inspiring story of Maysaloon – a band literally formed in the Syrian warzone – as testament to the inherent rebellious triumph of the genre, or even just the fact that the best up-and-coming metal band on the planet come from France (Gojira, we’re looking at you), it is very apparent that metal on the global scene has never been more potent and vocal in expressing diversity. The scene has expanded far beyond the traditional spawning grounds of the US, UK and Western Europe, carrying voices from each individual nation to help make modern heavy metal culture a truly universal phenomenon. And it’s about time.