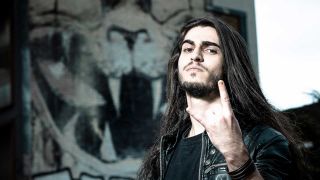 Jake Shuker, frontman with Damascus death metal band Maysaloon, will become the first Syrian metal musician to perform in the UK with a performance at the Imperial War Museum in London.

Shuker will appear at the Imperial War Museum on Saturday July 6 as part of the Rebel Sounds Live season. It has been organised in conjunction with the World Metal Congress.

He will be performing material from Maysaloon’s forthcoming album, A Lip To Earth, A Lip To Heaven And A Tongue To The Stars.

At 12 noon, he will perform the band’s single, Pillars Of Creation, in front of the museum’s display of war machines. This will be followed by a second appearance at 3pm, when Shuker will be speaking to the BBC’s Ben Zand about channeling the sound and fury of the Syrian war into metal music.

“I cannot wait to unleash heavy metal onto the hallowed surroundings of the iconic Imperial War Museum for the first time in its history,” says Jake. “Ever since Black Sabbath’s War Pigs, heavy metal bands have been critiquing the folly of war. With Maysaloon, we have taken the sounds of bombs and moulded them into riffs and beats”.

Maysaloon were formed in Damascus in 2014, in the midst of the bitter civil war between the Syrian government and rebels opposed to President Bashar al-Assad. They released their debut album, The Forgotten Dome, in 2017.

Since 2018, they have been based in Beirut, Lebanon. A Lip To Earth, A Lip To Heaven And A Tongue To The Stars is due out later this year. It is inspired by the Baal Cycle, a Middle Eastern mythology based around a a cycle of life and death.

Details of the event are available on the Imperial War Musuem’s website.