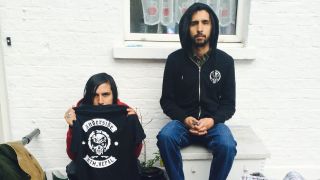 On Saturday April 25, Nepal was struck by a 7.8 magnitude earthquake. More than 7,500 people are known to have died, and 14,500 have been injured, in the latest figures reported by the BBC. Four thousand aid workers have gone to the country to help in recovery efforts. And helping out is one heavy metal band from the nation’s capital, Kathmandu.

“It’s very devastating to see the places we grew up turn into rubble,” says Vuwan, manager of Underside. “Luckily, our families and friends are safe, but there are huge tragedies all across the country. Personally speaking, our childhood hangout place, where all the musicians used to hang out pretty much every evening, is gone. It’s so heartbreaking to see that nothing is left anymore.”

Vuwan and the band’s vocalist Avishek are currently in London, but their contact with friends back home makes for frightening reading.

“All they can see is dust,” Vuwan says. “We had more than 100 powerful aftershocks, so everybody, including our friends and families, are staying out in the open field, because of fear of another shock. There have already been shortages of tents for people. Some people are just out in the rain. Everybody seems scared, but Nepalese are calm, and [they are] trying to help each other. We, the people, are helping and making the real difference.”

The capital city is nearly 3,000 years old, with a wealth of historical and architectural treasures. Seven of the temples and monuments in Kathmandu Valley are UNESCO World Heritage Sites. The unique location of the city, on the ancient trade route between Hindu India and Buddhist Tibet, help attract tourists from across the world. Much of the city is now ruined.

“Kathmandu is our home town and it’s a very beautiful city with lots of ancient temples and monuments,” says Vuwan. “We grew up seeing it as a part of our daily lives. All those moments and temples have some sort of resemblance to our childhood. Now it’s just piles of wood and concrete. I don’t know how we are going to get over this. Kathmandu will never be the same, nor Nepal.

The destruction was not limited to the capital, however, and it is here that Underside want to help.

“What breaks our heart is when we read and see the videos of people in remote villages or the epicentre site,” Vuwan continues. “It has been reported that hundreds of villages have got no help or support, even a week after the earthquake. This is where we would like to focus our work, trying to reach out to these places, and we have already started the process. Our dedicated fans and volunteers are going to these places outside of Kathmandu Valley and offering basic things like food packages, water, medicine and other necessary stuff. We went to a place called Nuwakot on our first round and today we have sent another team to Gorkha, which is one of the most affected regions.”

The United Nations Office For The Coordination Of Humanitarian Affairs (UN/OCHA) estimated on April 30 that $415 million (£272.3 million) would be needed for humanitarian aid, with the primary concerns being supplying food to the immediately effected population – estimated to be 3 million people – along with the rebuilding of 130,000 homes, the housing of 24,000 people currently living in makeshift camps, and the reuniting of lost children with their families. The world has been quick to offer aid, with Britain’s Disaster Emergency Committee raising £33 million so far, with the government offering a further £22.8 million in aid. But Vuwan does not believe this is going straight to the people affected.

“The country has received millions of dollars in aid,” he says. “We seriously have no idea why it hasn’t been released yet, or in what ways government are utilising these funds. The police and armies are going out and helping to rescue the people who are still buried, but in terms of leadership, we are clueless. It’s actually quite embarrassing to say that our prime minister still hasn’t come out and responded to the people. Not even a small message for people to stay together in this hard time. This is pathetic! On top of that, all the individuals who are making an effort to help on their personal level are being discouraged. We had one of our friends get stopped, and asked by government officials to pay the tax on the relief goods which he was trying to distribute to the victims. That is insane.”

Outlets like the Telegraph have also reported on these allegations.

Over the weekend, Underside posted an update on their Facebook page of their efforts (plus those of their friends, families, fans and supporters) to bring aid to those who need it. The London-based members have been helping send aid to Nepal directly, too. It is clear they do not trust the Nepalese government to help directly.

“Apparently, now [our] government is seizing any funds going into the country from people from all over the world,” Vuwan says. “They are stopping people from helping on their personal level and want all the funds to go into the prime minister’s fund, which no Nepalese believes will be spent transparently to support the victims.”

However on the Disaster Emergencies Committee website, the company are keen to assure all donations will be received by those who need them, stating “DEC member agencies deliver aid directly or through trusted NGO and community partners. Deliveries are carefully monitored to ensure aid reaches the people for whom it is intended. Member Agencies are co-ordinating our activities with the UN and government officials but take their own decisions about who needs aid most.”

“You can imagine, as young people it boils our blood,” Vuwan concludes. “But we are aware this is not the time to criticise, but to be a help in any way possible. Hence the reason we are using our band, and our fans from all across the world to help us to help the earthquake’s victims. At this time, every little help counts and we are determined to do our bit.”

If you would like to donate to the Disasters Emergency Committee (that funds 14 different charities including the British Red Cross) then CLICK HERE NOW.