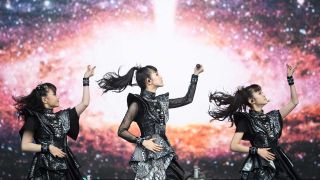 It just had to happen, didn’t it? Babymetal playing Glastonbury? There was an air of inevitability to the most novel of bands to explode from the metal scene this decade eventually making it to Europe’s biggest festival – especially given Glastonbury’s proud penchant for adding at least a few leftfield bookings to its lineups each year.

Still, though, for a band who so unexpectedly pole-vaulted into metal’s big leagues five years ago, tests like these have been few and far between. How would Babymetal, a Japanese idol band who already stick out on traditionally heavy bills, fare sharing a stage with the likes of grime heavyweight Dave and rising pop sensation Billie Eilish?

The answer is: pretty damn well, actually. If there’s one thing for which Glasto crowds can be relied on, it’s latching onto moments that are A) glorious fun and B) completely absurd.

Babymetal tick those boxes and then some, of course, and as they bounce on stage and kick into Megitsune, it doesn’t take long for a curious (and very decent-sized) audience’s bemusement to melt into amusement, before giving away to pure joy. From there, it feels like an open goal for the trio – and it is a trio today, raising questions about who that third member up on stage is.

Set-wise, there’s airings for recently released tracks Elevator Girl and PA PA YA!!, plus an extremely promising, as-yet-untitled new number, but it’s titanic singles Gimme Chocolate!! and KARATE which really steal the show: the former being recognised by a big portion of the Other Stage crowd, the latter sounding positively earth-shaking, packing a lead riff so heavy it’d give a kaiju monster tinnitus.

Compared to their arena gigs, there’s not much of a stage show other than a bit of flag-waving and some nice on-screen visuals, but it doesn’t matter – Glasto is lapping up the synchronised dance moves and infectious, relentless earnestness from Su Metal and co.

They were rumoured to have only got off a plane from Japan the day before, but you’d never know it – they look genuinely delighted to be here and absolutely buzzing with energy.

“Let us hear your voices!” squeals Su, and Worthy Farm happily obliges. As they finish up with the power metal histrionics of Road Of Resistance, no one present can doubt that this is anything other than a big, fat victory. Babymetal remain metal’s most wholesome experience.