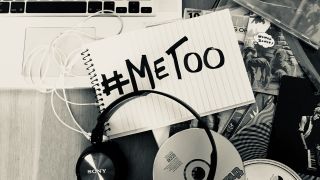 If you’re a woman who’s in any way involved with a music scene, chances are the revelations uncovered by Spin last week regarding former Real Estate guitarist Matt Mondanile – or, indeed, the unearthing of the wider-scale abuse of Harvey Weinstein, or the deafening outpouring of stories from survivors which eventually became known as the #MeToo campaign, or Jack Off Jill frontwoman Jessicka Addams’ account of her experiences with long-time Marilyn Manson bassist Twiggy Ramirez, or the news of all four members of death metal band Decapitated being charged with rape – will have come as little surprise to you.

As the Mondanile story – which featured independent accounts from seven women who chronicled his various alleged abuses against fans and fellow musicians over a 12 year stretch – broke, so too did the news that a group of women who had spoken out against a prominent musician in the London punk scene had been served with a defamation case in an attempt to ensure their silence. It didn’t work; the women took to crowdfunding site CrowdJustice and formed the Solidarity Not Silence campaign in order to raise the funds they’d need to fight the case. They raised their full total in less than a day.

As Bryony Beynon, founder of the Good Night Out campaign – an independent network of trainers who work with venues and festivals to help them deal with, tackle and prevent harassment – acknowledges, this is a situation which women in music will find all too familiar. “Sexual harassment and sexual assault are at epidemic levels,” she says. “Women who love music or play it, whether for fun or for work, already know this. This is not new, [but these] events always help to shine a spotlight.”

“Personally”, she continues, “I’ve been groped while performing on stage, had my fair share of sexist heckles, been stalked at festivals by venue staff, had my skills as a musician constantly questioned on the basis of my gender, called a ‘groupie’ or a ‘band whore’, and of course been on the receiving end of assaults that some men in all music communities have felt empowered to get away with behind closed doors.”

Sexual harassment and sexual assault within music are at epidemic levels.

“This is one of those issues that has always been present and many women have experienced to some extent,” agrees Larissa Stupar, frontwoman of death metal band Venom Prison. “Because not many [women] were speaking out about their experiences in the past, the majority of people just weren’t aware of it being a real problem. The majority [of metal music fans] are rarely affected by it because they have the privilege of being men, but just because nobody talked about it, doesn’t mean it didn’t happen.”

“I’ve had texts and messages from musicians that made me feel uncomfortable, pictures I never asked to see, groping, fans that tried to kiss me after isolating me from the band and much more of that nature,” she continues. “I have also experienced abuse of a sexual and emotional nature when I was dating someone [involved in the scene]. After separating myself from this person I had to leave the band [I was in], because he was constantly stalking me and my family, trying to convince me to take him back, while badmouthing my new partner and constantly making remarks about my body. I [had] blocked out many of the things that he did to me while we were still together, [but] they were returning to my mind and it felt like I was re-living them again. It felt so uneasy living somewhere where I could easily bump into him anywhere I’d go, I had to move far away to finally feel safe.”

The close-knit nature of scenes Larissa describes and the fear of being pushed out of them is, Bryony says, often part of the reason women don’t speak up against their abusers. “The only reason there is a constant sense of silence is because we fear not being believed, or being cast out of music scenes, which is all too common,” she says. “The biggest thing is to listen when your female friends speak up, and believe them without hesitation. Ask what you can do to help, and if they give you permission, challenge the person who’s hurt them.”

“All sexual harms exist on a spectrum,” she continues. “Each and every small comment which passes by without challenge because you felt awkward calling it out, or figured it wasn’t a big enough deal, actually creates what we call a ‘conducive context’ for much more serious harm.”

You always have to protect someone else in order to protect yourself in the music industry.

It’s not just within music scenes, or between artists and fans, where this abuse exists. Instead, it reflects something which is endemic in the music industry at large. Take, for example, the story of music journalist Rachel Grace Almeida, who was working on a story with a senior male PR when he invited her to a show. “I went to the gig because I was covering his artist,” says Rachel. “Obviously when you go [to gigs] – not just in the industry, but in any capacity – it’s a social setting. So we were having drinks with one of my other colleagues; it was a group of us.”

But the story, all too predictably, takes a darker turn. “We decided to get a cab back to the same area because we lived maybe a mile away from each other,” she continues. “And then, in the back of the cab, he assaulted me. He tried to get with me, pinned me down… eventually I managed to get the cab driver to open the door, where I ran out and went home.”

After this assault, Rachel wrote an article which examined her own experience plus similar accounts shared with her by various female colleagues. The piece was published over two years ago and there has, she says, been little attempt to clean up the industry in the meantime. “There’s more of a conversation about [sexual assault], and people are a bit more emboldened to say things now, but in terms of actual changes in behaviour there haven’t been [any],” says Rachel. “I’ve noticed that it’s the women doing all the labour for this cause, [but] it’s not women who are the problem – it’s men who are the problem.”

“We’re pretty much just screaming into the void if men don’t change their behaviour,” she continues. “People are told ‘it’s all part of the industry, this is just the way the world works’, so you just have to shut the fuck up and take it unless you want to be seen as the liability. You always have to protect someone else in order to protect yourself in the music industry, but it’s not our responsibility to change the way we act and we behave. If [perpetrators] aren’t actually reprimanded legally, or socially, or career-wise, then it’ll just keep happening.”

Why do survivors of sexual violence have to rip open their wounds to share their traumatic experiences with the world, to shine a light on a problem that we are all fully aware exists?

Rachel’s belief that the emphasis needs to be on men to reassess and challenge their behaviour is something shared by Cassie Fox, founder of the Loud Women organisation. “The men [have] to lead on this, because they’re the ones who have all the power in the music industry,” says Cassie. “It always ends up being the women or the people who are being harassed who have to be the ones to dust themselves off and force the change, so it would be really good to see some male members of the music industry taking a lead on making it a safer space for women to work and play in. Organisations like Loud Women are doing what we can to make changes in the industry, but we’re not the ones who have all the power.”

“Men need to understand that it’s not our responsibility to carry the brunt of this issue,” agrees Rachel. “On top of being assaulted, being harassed, being dismissed, being abused; on top of it we then have to go and educate men? No, that’s not how it should be, because we already have to do everything else when it comes to this.”

“Sexual violence is almost exclusively carried out by men on women, non-binary people and other men”, says Larissa. “So far, [they] have been relying on women to fix this problem which is not ours to fix. Why do survivors of sexual violence have to rip open their wounds to share their traumatic experiences with the world, to shine a light on a problem that we are all fully aware exists?”

Every single woman we spoke to for this feature flagged a generalised failure to take women at face value as key among the issues needing to be addressed. “People doubt women so much; we’re hysterical, we’re overly-dramatic, [we’re] all these horrible things, so when we speak up about something, people don’t believe us because of the gender stereotypes,” says Rachel. “That’s the most important thing, because there’s definitely a lot of people who know about dodgy things going on who don’t say anything and don’t interject. Someone might know a colleague that’s being harassed by another colleague, for example. They might not agree that it’s right, and they might be against that, but why aren’t [they] directly calling the perpetrator out? Sometimes people don’t do it because it’s awkward, or they want to save face, or they don’t want to get involved… but you’re putting your own embarrassment over someone else’s well-being, and that’s really fucked up.”

“We need to start taking women seriously [when they] tell us about their experiences, without brushing them off or sweeping them under the carpet,” says Larissa. “We need to exclude abusers from our communities, because we all have the right to be able to feel safe when we go to shows, festivals or interact with our favourite artists. The excuse ‘He’s a nice guy, he would never do something like that’ is not valid, because ‘nice guys’ do things like that all the time. Eyes need to be opened and lessons are to be learned.”

Assuming that this sort of thing “just doesn’t happen” within your scene, or among the people you know, is an equally dangerous assumption, continues Larissa. “We all need to realise that the metal community is not a sheltered world in a little bubble. Not being mainstream doesn’t mean there are no Dr Lukes, Harvey Weinsteins or R. Kellys hidden behind all the fame.”

So how do we deal with abuse that is this wide-spread, this insidious? “This is a big problem within music – not just [the] industry, but music communities and music circles in every capacity,” Rachel concludes. “If someone’s an abuser, don’t support their music. Don’t go to their shows, don’t give them that platform that they had before, because that’s just essentially silencing people and making [perpetrators] feel like it’s okay to treat women like shit.”

If you’ve been affected by the issues raised in this article, you can visit Women’s Aid, Victim Support or The Survivors Trust for help and advice.

Meet the people stamping out sexual harassment in metal