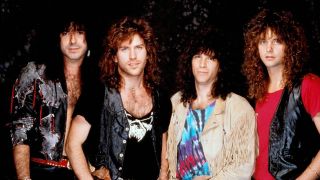 The 90s was a tough time to be an AOR band. The giants of the 70s had found themselves lumped in with the so-called ‘hair metal’ movement, which in turn had been usurped by grunge. The smart melodic rock acts changed with the times – most notably Bon Jovi, whose Keep The Faith album found them ditching the Desmond Child anthems in favour of a more contemporary sound. They were the exception, though: most groups struggled in the face of an unforgiving music industry, and there were countless casualties.

But melodic rock didn’t die: it just went underground. While the likes of Def Leppard kept it in the charts for a while (before themselves taking an alt-rock detour with the poorly-received Slang), bands such as Crown Of Thorns and Unruly Child, and devoutly independent labels like Escape Music and Now & Then, kept the flame burning, albeit away from the public eye. The genre was still capable of producing some great music during that barren decade, as these 10 essential albums prove.,

A supergroup featuring Tommy Shaw of Styx, Night Ranger’s Jack Blades, Ted Nugent and future Lynyrd Skynyrd drummer Michael Cartellone, Damn Yankees sold two million copies of this debut and half as many again of 1992’s Don’t Tread On Me. Their success was well-earned. Shaw and Blades’ traditional melodic inclinations are evident on Coming Of Age, Runaway and the soaring High Enough, and Nugent’s grit adds backbone to the title track and the spit ‘n’ sawdust of the record’s crazed closer, Piledriver. Nugent has often spoken of an unreleased third album. Can we hear it soon, please?

Kip Winger has every reason to hate Beavis & Butt-head for the vicious lampooning. His band Winger’s self-titled debut album was bright, breezy and sprinkled with hits, but with follow-up In The Heart Of The Young the band really spread their wings. The likes of Can’t Get Enuff, Loosen Up and Easy Come Easy Go proved that Winger could still plunder the drawer marked ‘Obvious’, but Rainbow In The Rose and In The Day We’ll Never See showcased some top-level musicianship. And when it came to ballads, Miles Away and Under One Condition lived up to the band’s extraordinarily high standards of songwriting.

How unjust that many people will remember Unruly Child solely for ex-King Kobra/Signal singer Mark (later Marcie) Free’s later gender reassignment. Given an extravagant yet slick production by Beau Hill (the era’s man with the magic touch), Unruly Child was a virtually flawless collection of euphoric hard rock anthems (On The Rise, Take Me Down Nasty, Who Cries Now, Lay Down Your Arms) and lighter-waving ballads (Is It Over, To Be Your Everything). The band only ever attained cult status, despite continuing with current Foreigner singer Kelly Hansen, then Philip Bardowell, after Free left.

After the teenybopper frenzy of The Final Countdown, Europe’s sound was maturing into something very special. Two albums later, Prisoners In Paradise was an exemplary radio-friendly hard rock collection that should have provided an opportunity to discard the baggage of the past, had the band not imploded. It had everything: Joey Tempest’s charismatic delivery, fiery guitars from Kee Marcello, Mic Michaeli’s keyboards, Beau Hill’s fulsome production, and some divine songs. All Or Nothing and A Little Bit Of Lovin’ ripped and snarled playfully, while the title track’s mini-symphony might have made Queen proud.

Picking themselves up after the death of guitarist Steve Clark, and minus the collaboration of producer ‘Mutt’ Lange, Def Leppard summoned up all their enviable skills as tunesmith – plus unexpected quantities of good cheer – for Adrenalize. With a record full of punning ditties about getting rocked and making love like men, Leppard were like the drunk in the kitchen at parties who is pretending not to miss a girlfriend who’s left him. Which isn’t to demean this fine and successful album, which has sleepers including Have You Ever Needed Someone So Bad, Tear It Down and the Clarke tribute White Lightning.

Combing the anthemic melodic suss of Def Leppard with Extreme’s chunky funk, Canada’s Harem Scarem should have become stars, And they might have done, had they not lost the plot and tempoarily changed their name to Rubber. Their second album, Mood Swings, is where it all came together best: Harry Hess’s commanding vocals, Pete Lesperance’s blazing guitar runs, the metronome rhythm work of bassist Mike Gionet and now departed drummer Darren Smith. Great riffs, superb harmonies and Hess’s top-notch vocals make little-known status difficult to fathom.

Despite their unlikely pedigree – Mohican-topped vocalist/guitarist Jean Beauvoir had found infamy with Wendy O Williams and the Plasmatics, guitarist Micki Free lurked in the shadows with disco kings Shalamar, and drummer Tony Thompson played with disco kings Chic and 80s Duran Duran side-project The Power Station – Crown Of Thorns’ brand of melodic hard rock was slinky, funky, cocksure and unusually sexy. Sadly, not even the management skills of Paul Stanley and Gene Simmons could prevent label Interscope from dropping the group, even after they’d paid a reported $1m to sign them, and their debut emerged on an indie.

Journey frontman Steve Perry confused us with his best Sam Cooke impersonation on his debut solo album, 1984’s Street Talk, but his exquisite For The Love Of Strange Medicine sounded heaven-sent to the ears of melodic rock fans.

With the songs on that record polished to a glistening shine, and with Perry’s voice rising to tear-jerking crescendos, there wasn’t even the scent of a filler track. Album closer Anyway was Perry’s (he’s now seemingly retired) touching comment on what had threatened to be Journey’s break-up (the band carried on without him).

Seven years in the making, Walk On was only Boston’s fourth album in a career that had begun almost two decades earlier. Although it didn’t feature the charismatic vocals of Brad Delp – his place was taken by Fran Cosmo, who had appeared on ex-Boston guitarist Barry Goodreau’s debut solo album – the band’s well-honed style of progressive-tinged pop-rock remains easily identifiable. The album made the US Top 10, but I Need Your Love was its sole hit single.

The last Journey album to feature vocalist Steve Perry, Trial By Fire has been slighted for its lightweight feel – and that includes the guitar playing from Neal Schon, who once told Classic Rock: “It would’ve been better if we’d taken six songs off it – the ballads!” But when it comes to sensitive songs Journey are simply in an (AOR) class all of their own. If He Should Break Your Heart, Don’t Be Down On My Baby and When You Love A Woman are beautifully constructed; that the latter was apparently recorded in a single take is truly astounding.