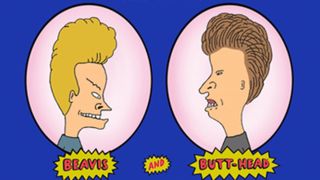 Throughout the history of popular culture there have been many voices in music media that have had influence on our scene. From the early days of rock and roll and Lester Bangs distinctive and hugely influential critiques in Rolling Stone, to today, where YouTube host ‘The internet's busiest music nerd’ Anthony Fantano on his The Needle Drop channel, which has just ticked over the 2 million subscribers mark. Music critics have often wielded the power to truly make or break a band.

But, in the 90’s two very different voices were arguably the most influential of an entire generation. With a simple ‘This sucks’ or ‘This rules’, Mike Judge’s creation of two dunderheaded high school kids could tear down careers or give much needed cool points to underground acts that would never usually be seen on prime-time MTV. And, thankfully for us, Beavis And Butthead loved metal.

Back in 1992 budding film maker Mike Judge conceived a short animation named Frog Baseball, starring two teenage, heavy metal loving, delinquents. MTV bosses saw it, and presumably recognising the pair as fairly typical of its core Generation-X audience of the time, commissioned Judge to develop the characters into the stars of their own series.

First airing on the 8th of March 1993, Beavis And Butthead was an almost instantaneous smash, and the two became unlikely pop-culture icons. Unfortunately, it wasn’t quite in the way Judge had in mind, rather than laughing at the demented antics of the duo, Beavis And Butthead became 90’s anti-heroes.

Judge had conceived of the pair as a conduit for his satirical comedy, and, whilst those ideas remained in the show, more people just straight up related with their no nonsense, slacker attitudes and blunt observations on the music world.

In fact, although each episode did have a narrative structure, what Beavis And Butthead became most notorious for were the sections of the show where the two just sat and watched MTV. Inspired by the cult 80’s show Mystery Science Theatre 3000, Judge (who voiced both characters) would sit and improvise in front of series of music videos.

Often butchering some of the biggest names in music at the time (their destruction of Milli Vanilli has gone down in legend), but, crucially, giving a positive voice and exposure to some metal bands who could almost certainly never dreamt that they would be on MTV at all.

The likes of Napalm Death (Barney Greenway getting compared to Godzilla), Death and Morbid Angel were just a few of the extreme bands getting serious exposure from two of MTV’s most prominent voices, opening them up to an entirely new and mainstream audience.

Judge was obviously more than a little au fait with metal and metal culture, and often there were more than a few nods to metal fans strongest opinions. From their suspicion of Korn and the nascent nu-metal scene, to the polarising effect Metallica had on metal fans, one hated them and one loved them, it’s clear Judge understood the culture he was gently mocking.

And often he could get the two idiots to articulate what was great about bands in the most simplistic way. “If I just saw these guys walking down the street I’d have no idea that they ruled,” Butthead once opined of the unshowy looking Helmet whilst watching their Unsung video.

Some bands were even delighted to be torn a new one by the pair. Judge revealed a few years back that he bumped into Steve Grimmett of NWOBHM band Grim Reaper and apologised for the means things Beavis And Butthead had said about his band. Before being informed that Grimmett wished they had used an even cheesier video for them to rip into. If you were a metal band on Beavis And Butthead, any exposure was good exposure.

As they became bigger and even more influential it was obvious that metal bands were getting a boost from the pairs patronage, and in late 1993 the album The Beavis And Butthead Experience was released.

Featuring the pair duetting, weirdly, with Cher on a cover of I Got You Babe, it also gave the likes of White Zombie, Jackyl, Primus and Anthrax the opportunity to be heard by the more casual music fan. The album went on to sell over 1.6 million copies worldwide, going double platinum in the US to boot. Unsurprisingly, all of the bands involved went on to see their profile grow in the aftermath.

With a revival of the show in 2011 showing dwindling audiences as it went on, and MTV’s current target audience being more the 12-14-year-old pop fan than the late teenage rock fan of the 90’s, it seems we may have seen the last of the duo for the time being.

It’s even arguable that current pop culture is even stupider than Beavis And Butthead ever were, making it harder for the characters to work than last time around.

But, with metal’s exposure to mainstream culture having hit an all-time low in the last decade, it’s easy to look back at Beavis And Butthead as a glorious moment in our scene’s history. As one of the few positive voices for metal in mainstream culture, we salute them.

Beavis and Butthead is now available to stream on Amazon Prime.