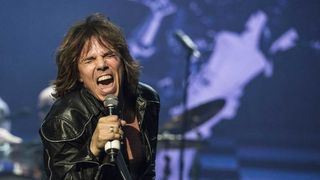 Over the last 35 years Europe have sold more than 20 million records, making them one of the most successful hard rock bands in the world.

Yet if you were to ask the average Joe on the street if they knew who Europe were, their response would often be, ‘aren’t they the band that sang The Final Countdown?’

Such was the phenomenal success of the title track from the band’s third studio album, which went to number one in 25 countries and sold more than 8 million copies worldwide.

“It’s weird because when we talk about The Final Countdown in the band,” says frontman Joey Tempest, “we mainly see it as an album track: it was over six minutes long when we originally wrote and recorded it.”

“And it’s funny because it’s sort of in a melancholic, Scandinavian minor key,” he adds, “but it’s still uplifting and it has a way of bringing people together and spreading good energy. It’s definitely brought a lot of people to us: it doesn’t matter whether we’re at a family festival in Denmark or Hellfest in France, people always come together and enjoy it whenever we play the song.”

But what about all their other great songs? They’ve got a whopping 29 singles to choose from, not to mention all the notable album tracks, from Aphasia (Wings of Tomrorow)through to Bring It All Home (Bag of Bones).

“You can imagine it was difficult for me because I’ve written most of the Europe tracks myself, although lately I’ve been writing more with the other guys in the band which is great, and it’s hard for me to put my favourites up there. Ultimately, this is a list of the ones that I enjoy playing live, the ones that I like to listen to, and the ones that I’m the most proud of.”

“I’ve put Open Your Heart at number ten. This was one of the first songs that made people in Scandinavia sit up when we released our second album Wings of Tomorrow. It also caused people in New York to react, and I remember Scorpions’ producer Dieter Dierks contacted us after he heard the song to say that he wanted to work with us. So Open Your Heart was the song that opened a lot of doors. It was also the first sign of a decent song, I think, and the bridge before the chorus was really cool the way it played out. We actually re-recorded the song for Out of This World in 1988, but I prefer the original recording on Wings of Tomorrow because I think it has more nerve and emotion.”

“Superstitious was the first single coming out of the Final Countdown album and we had a lot of people in our ears saying, ‘try this’ or ‘try that’ by that point. But we didn’t listen to any of them: we just wanted to make a great album. We did it in London at Olympic Studios with Ron Nevison and I just remember this track felt really good to record. It’s got that old hard rock with a hint of blues sound to it, which I love, and it reminds me of the days when we used to go and see early Whitesnake in Stockholm, with Bernie Marsden and Micky Moody. By this time John Norum [guitar] had left Europe for a couple of albums, and I actually recorded the main melody for the guitar solo on a demo, which I then played to the band and Kee Marcello [Norum’s replacement] added some amazing scales and runs to it. In any case, it’s a classic Europe guitar solo: melodic, passionate and skilful.”

“This is an early Europe song. Not only was it on the first album, it was also one of the first songs written for the first album, so it’s actually a very early Europe song. It was probably the first song to get us some recognition outside of Sweden. In fact, when I first went to Japan when I was 21 the song was in all the hard rock and heavy metal clubs, and people were going nuts for it. So it was an important song for the band early on, and it’s a cool track with lots of different feels and parts to it, and a nice melodic guitar solo too.”

“I remember watching the movie The Last Waltz by Martin Scorsese, and all the stuff with The Band deciding to do their last show was really intriguing to me. And I loved the movie itself and the music as well. Bring It All came out of that, and envisaging one day that Europe would bring it all home with our own last show. It’s a really emotional song, and we play it at the end of our shows when the crowds start leaving after we’ve finished our final song, which is usually The Final Countdown. I wrote it with Mic Michaeli [keyboards] during one of our hung over jams in San Francisco in the ‘90s, but it was called something else back then, and we brought it back for Bag of Bones. It turned out to be a really great song.”

“I have to put Rock the Night in there because it’s been in all our live shows since we wrote it: it’s a great live track and people really enjoy it. It even sounds better these days, I think, and it’s one of those songs that brings people together. I think the record company in New York [Epic Records] actually wanted us to release it as the first song off The Final Countdown, but we stood our ground and released it as the second international single along with a music video, which we filmed at the Hard Rock Café in Stockholm.”

“Riches to Rags is the opening track on Bag of Bones. I remember when Norum put the solo down I was completely blown away: it had so much attitude. I don’t think anyone else out there could have done it with more skill and passion. It’s one of the most amazing guitar solos ever made. The song was almost like two fingers to everybody as well, and we really cut the cord from the ‘80s on this album.”

“This song has become one of my favourite ones to perform live. I love it. There was actually a moment during the recording of Bag of Bones when we had a minute’s silence for the ‘80s sound and production techniques, and everybody in the control room, including Kevin Shirley [producer], bowed their heads and said goodbye forever. After that, a new band was born.”

“This song is fast becoming one of my favourite songs by Europe. I like the sentiment in the lyrics, about the rise and fall and lingering of the rock business: they’re kind of skirting around the idea that rock‘n’roll is dying, which of course it is not. It’s about the new bands that are drinking from the fountain, like Rival Sons, and it has a lot of meaning to me.”

“For number two I’m going to go with the title track from Last Look at Eden. This was our eighth studio album, and our third comeback album since reforming in 2003. We realised recording some of those songs that the engines had really started again, and it was around this time that we realised a younger generation of fans getting were into our music again. Lyrically, I’m really proud of this album, and the song itself is very majestic. It’s one of my favourites in our live sets.”

“The last song I’d like to pick is the title track from our latest album, War of Kings. It’s a really cool track. When we listened to the first mix of it we realised we’d written something very special. Dave Cobb was an amazing producer to work with too, and we were all on the same page as far as evoking feelings of Led Zeppelin and Deep Purple and all the bands that we grew up listening to. We’ve opened our live shows with this track for about a year now. It’s so powerful and it always gets people really into the mood for the show. I love the guitar solo too: it’s so tasteful and well executed with loads of Norum feel. So I’d say I’m the most proud of this song in Europe right now, and to have one of the best guitar players of my generation by my side has made this whole journey even more amazing.”