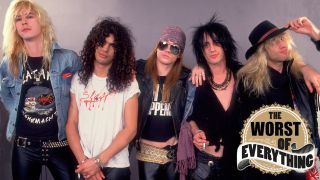 When Slash, Duff and Axl decided it was time to stop all the nonsense, bury the hatchet, and breathe new life into Guns N’ Roses, any true rock fan would surely have been delighted. Whatever you think about Rose’s ongoing silly antics, Slash’s distinctly average post-Guns career and Duff’s eyebrow-raising wealth management firm, there’s no denying that the singer, guitarist and bassist formed the bedrock of the most important, most exciting rock band of the last 30 years. The number of classics Guns N’ Roses have produced is staggering. Welcome To The Jungle, November Rain, Sweet Child O’ Mine, Estranged, Paradise City, Madagascar to mention just a few… the list is long and illustrious, the songs rightly treated like rock royalty.

Normally we’d come to praise Guns, not bury them. But that isn’t to say that the band haven’t produced some absolute turkeys over the years. You don’t believe us? Well check this shit out…

I gave Appetite… five stars when I reviewed it on release way back in 1987, and I’ll defend its ‘rock’n’roll genius’ status to the death. But not even I can stake a claim that the album’s all killer, no filler. Not when this little turkey is nestling amongst the tracks. Axl starts off by telling us he’s been ‘thinkin’ ‘bout sex’. We can only wish he’d spent his time actually having sex rather than lending a hand to writing this tosh. To be fair, the tune starts off with a pretty neat Slash riff, but it quickly descends into hard rock farce, a mishmash of half-baked riffs and instantly forgettable vocal melodies. Anything Goes? But not this, surely.

Now I know a lot of people like the New York Dolls – and to a certain degree I do too. They were loud, brash and abrasive, and their glam-evolving-into-punk look was undeniably innovative and appealing. Trouble is, they couldn’t carry a song in a bucket. Human Being is a case in point; a tune that rides roughshod over some basic boogie-woogie riffs dressed up as something attitudinal. This Guns version tries to make something of nothing, with piano plonking all over the place and Axl working himself into a right old vocal lather. Trouble is, it’s all style and zero substance. Six minutes 48 of nothing at all.

This tune sounds like Axl couldn’t make up his mind whether he wanted to go hip hop or pay homage to Nine Inch Nails. What he ended up doing was producing one minute and 23 seconds of experimentation that might have been interesting as a starting point to developing something original, but as it stands feels like a quarter-baked idea not really fit for public consumption. You can only wonder why the band felt it was enough of an artistic statement in this embryonic form to merit inclusion on an official release. We’ve got news for them. It wasn’t.

Guns have never convinced me when they try to rock out at breakneck speed. This song is a perfect example of why. Slash is a player of groove, swagger and taste. He’s not a thrasher, and when he tries to up the tempo and punch out the riffs it almost always comes across as forced and throwaway. At two minutes and 23 seconds Perfect Crime is mercifully short, and while it’s probably fun for the band to play hard and fast, this feels like something you’d play at soundcheck just to get the fingers moving. Nothing more.

Is this the sound of the bottom of a barrel being scraped? While I would go toe to toe anytime against any Guns fan who feels Chinese Democracy has no value, it’s hard to put up a solid defence of Scraped. It sounds like a song where the verse, bridge and chorus were swept up off the cutting room floor and glued together to fulfil some sort of contractual obligation. A song that you’d write early one morning and dismiss out of hand by lunchtime.

Yes, it was cool that Guns didn’t only listen to classic rock. It was what gave them their nihilistic, ‘fuck you’ attitudinal edge, their point of difference from 99 per cent of the generic hair metallers on Sunset Strip. But playing punk music clearly wasn’t what this band was cut out for. And playing bad punk music was a huge waste of everyone’s time. Fear’s I Don’t Care About You is really bad punk music, a simple thrash that only exists to tell the world to fuck off. And that gets old real quick.

Originally released on the Live ?!*@ Like A Suicide EP in 1986, this track was the first time the world got to hear Guns N’ Roses. It’s not a terrible song by any means, but judging by the extraordinary heights Guns would themselves scale, it’s clear filler. The opening riff is a pretty good rip-off of Joe Perry’s lick in the chorus of Aerosmith’s Toys In The Attic. Come to think of it, the whole song feeds off the Tyler and Perry classic. But it never manages to achieve anything like the same sass and class. You can hear a great band in the making, for sure. But this is not a great song.

This number really doesn’t do itself any favours by sitting just ahead of sensational album closer Coma in the original running order of Use Your Illusion I. Dead Horse starts with a plaintive bit of acoustic strummery as Axl whines ‘not that you care’ over the top. Well at least he got that right! Despite the singer letting out a piercing scream that suggests he’s got his nuts caught in the hi-hat when the tune finally revs up, there’s nothing Rose or anyone else in the band can do to save this turgid riffer from sinking under the weight of its own aspirations.

Crackin’ title, poor song. It starts out with Axl trying to channel his inner Robert Plant doing Immigrant Song, but before you know it he’s off at a million miles an hour on what appears to be a rant about the war in Iraq – though who knows for sure? There’s the germ of a tune here, but it’s comprehensively buried under Axl’s bile and an over-dependence on odd effects. It’s hard to see how this one made the cut on Chinese Democracy. One listen to beauties like Better or Sorry would surely make anyone drop this song like a stone.

What exactly are Guns trying to do here? It’s hard to tell. My suspicion is that they thought this tune was casually nodding at those messy Stones songs that made Exile On Main Street such a raggedy-assed joy. The problem is that nothing – really nothing – comes together here. The band sound like they’re more interested in forgetting the whole thing, downing tools and rolling a big fat one. I for one would have been 100 per cent behind that idea.