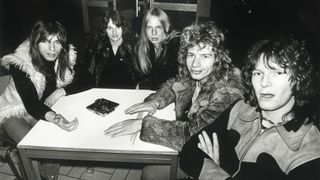 During the ‘70s Yes pushed musical boundaries about as far as any band could go while selling out stadiums and regularly going platinum. With such an embarrassment of riches to choose from, figuring out their top 10 tracks can be anything but easy but don’t worry, help is at hand.

Taken from 1970’s Time And A Word, this song is driven by short-lived original guitarist Pete Banks recurring jagged riffing and pushed into overdrive by original keyboardist Tony Kaye’s searing organ and Bill Bruford’s skittering, high-tuned drums. They’re rocking out but veiled behind psyche-tinged effects that properly belong back in the ‘60s. However, the ruminative, ornamental middle section hints at what lies in the future for the group.

Spawned from a jam between Yes lynchpin Chris Squire and drummer Alan White, Yes end controversial album Tormato with a commanding flourish. There are times when Steve Howe’s terse guitar and Rick Wakeman’s Polymoog sound as though they’re jousting with for supremacy, goading each other with a series of escalating runs.

You want an ebullient air-punching song whose lyrics involve attainment in sports as well as the sometimes tricky art of song-writing, which also sneakily co-opts some hairy-arsed, back-to-basics rock ‘n‘ roll with a pinch of punk and soupcon of succinct symphonics? Here, this blast from ‘77’s album of the same name should sort you out.

Punchy grooves, tremulous bass and nebulous harmonies that sound like the Beach Boys in outer space. Though Tony Kaye famously got bored with the repeating chords of the song’s striking conclusion, there’s no denying that this cut fromThe Yes Album is a masterclass in tension and, when it comes, ecstatic release, is where Yes really took off.

Look, just ignore those fair-weather friends and naysayers. Sixth studio album Tales From Topographic Oceans remains an astoundingly ambitious venture, filled with glorious themes and impressive dynamics from a band willing to take a leap into the unknown. When Jon Anderson sings that he’s waited all his life for this moment, you know he really means it.

From 1972’s Fragile and the song that broke the band in America via FM radio, Roundabout is a tumultuous yet catchy synthesis of West Coast harmonies, shards of spiky bass cartwheeling around Howe’s deft chords and glancing harmonics. It shouldn’t work but does, with new boy, Rick Wakeman’s firework-filled organ solo unabashedly sealing the deal.

The template for the classic Yes sound as we know it is crystallised with this song from the aptly-titled The Yes Album. With sections seamlessly integrated, you can almost hear the giddy shock of the new they experienced during the recording. Blending Howe’s dizzying, euphoric soloing with the central soaring theme, it’s an overture awash with joyous invention.

Squire’s thunderous bass, Bruford’s surgical strikes, Wakeman’s shiver-inducing Mellotron, Howe’s galloping runs and Anderson’s yearning vocal: it’s the moment when Yes decided they could go beyond anything previously attempted. Epic in every sense of the word, this moment from Fragile is the point at which they acquire the confidence to be a world-beating band.

Jon Anderson once said that all the extended compositions the group had been working in the ‘70s were leading to this track from ‘77’s Going For The One. A sublime arrangement of several contrasting elements, the convergence around the Master of Light section builds into one of the most transcendent moments in the Yes catalogue.

The final act by this particular incarnation of the group, from the album of the same name, is nothing short of astonishing. Retaining a magical aura even 44 years after its release, masterful arrangements, some of Anderson’s most potent wordplay and their exceptional instrumental firepower ensures the focus isn’t lost for even one of its 18-plus minutes.