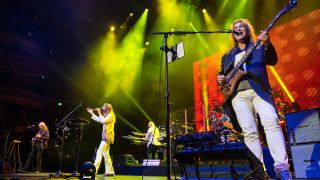 Logically, of course, there is no moral or legal reason why the current Yes lineup should not continue in their present incarnation, not least because people have bought tickets to see them on the ongoing US tour and, perhaps more importantly, because the death of Chris Squire will have focused many diehard fans’ minds on a need to celebrate his musical legacy. The problem is that the current Yes lineup comprises no one’s idea of a classic or even particularly credible formation for the band. Steve Howe’s presence ensures that the whole thing isn’t a dishonest farce, but even he isn’t an original member. Talismanic drummer Alan White has had to abandon the US tour due to an urgent need for back surgery: surely the last nail in the coffin for the notion that this is actually Yes, rather than a well-intended tribute by ‘Steve Howe and pals’.

Squire’s stewardship of the Yes galleon was fundamental to its crew’s creative direction; his steady presence a necessary anchor to ensure continuity and authenticity. And yes, this band have had an absolutely insane number of lineup changes and purposeful reinventions over the last 40 years or so, but Squire was omnipresent and his absence has forced Yes into uncharted territory. They’re gamely keeping the flag flying onstage, but is there any real enthusiasm for this lineup to make new music? It seems unlikely.

Okay, so Pink Floyd survived the departure of Roger Waters, but David Gilmour’s voice and guitar playing were more than sufficient to keep the band’s integrity and trademark sound intact. Similarly, Genesis successfully weathered the loss of Peter Gabriel and went on to be almost embarrassingly huge during their second decade. But as enjoyable as recent albums have been, Yes are unequivocally on the home straight at this point. It would be unfair to begrudge these musicians a steady income, of course, but does it need to be earned under a banner that no longer seems appropriate

Meanwhile, Yes fans are readying themselves for the launch of ARW, a much-anticipated collaboration between Jon Anderson, Trevor Rabin and Rick Wakeman. Keen observers of the band’s frantic revolving personnel door will know that this trio did perform together on the Union tour in 1990, but that they have never joined forces on a Yes studio project. As a result, the new(ish) band’s claims to be “the definitive Yes lineup” are nothing short of ludicrous, and yet it’s hard to deny that by most sensible reckoning, any band featuring the man who sang on every one of Yes’ most revered records and the keyboard maestro that most diehards regard as the Yes ivory-tinkler – not to mention a quintessential prog icon - is going to effortlessly, and rightly, overshadow the rabble of hired hands and stand-ins currently performing under the Yes banner.

That’s not to take anything away from the latter group’s efforts being made to entertain the faithful, but while Jon Davison’s superb voice and undeniable similarity to Anderson may enable punters to close their eyes and imagine that they’re listening to the band that recorded Close To The Edge and Fragile, the reality is that Yes’ fractured and fractious history means that ARW is, at the very least, ever so slightly more plausible as a bona fide Yes lineup than the one that is serving up Drama in its entirety and half of Tales Of Topographic Oceans across the States right now.

Doubtless there are countless personal issues and disagreements that will prevent a wholesale reconciliation between remaining members of genuinely classic Yes lineups, but it’s hard to deny that the obvious (and perhaps only) worthwhile solution to this whole situation is for the two bands to join hands and give Squire and the music he helped to create the send-off it so richly deserves. If that’s out of the question, it must surely be time for Howe and his renegade outfit to knock it on the head and leave us with memories of a band that took progressive rock to the world’s stadia and enriched our musical lives beyond compare.