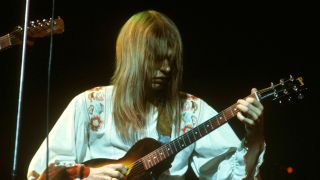 Steve Howe has just just released Anthology, a double-disc exploration of his impressive solo work that spans over 40 years. While he’s in reflective mood, we asked him to come up with his five favourite tracks by Yes.

“We went through a real vortex to find a way of presenting that song the way it is now, and it’s so magical. It was really deep, the music had to work. It draws on the soft side of Yes, like And You And I and Wonderous Stories, and it was astounding. Jon had written lyrics about a sculptor [Roan] and so there was a furthering of the connection in there. It was really interesting project, and that song really did feel like a project. Turn Of The Century is central to Going For The One.

Well, I can’t choose the title track because that’s got so much in it! But …Khatru’s got a lot of elements that I think are really archetypal of the band at that time. Over the years when we were working on material we could look back and ask, what would we have done with this in the days of Close To The Edge? Maybe sometimes we didn’t ask that question enough.

My mind flashes to that album. I remember us playing Tempus Fugit before we actually met Trevor [Horn] and Geoff [Downes], but they added to that immensely. Trevor wrote all the words, as far as I remember, and Geoff helped orchestrate it, and Chris [Squire], Alan [White] and I invented an awful lot of the structure of the song. But the dynamic way we pulled it off, the speed was frightening. Songs often speed up on stage, but we always agree to play this one slower! There was a real drive to keep Yes going and Trevor and Geoff gave us a way to do it with relative ease. The direction was great on that album.

Ask me about Yes, and I’m only looking at the 70s. Not that I dislike the albums we made after that, some of them are very good. But there was a wonderful innocence about [the 70s albums]. South Side Of The Sky is like Starship Trooper in that it has three different sections, and three different senses of development. It kind of rocks, and then, it doesn’t. Then it’s light, partly down to the influences on the others, groups like the Fifth Dimension. It wasn’t what I brought to the party, but it’s a nice section. For the guitar solo section at the end we weren’t content with a Leslie speaker so Mickey Tait – who went on to be a big sound and lighting guy – was spinning a microphone around his head to get that whooshing live sound. I can see him now, with this microphone. There was a lot of fun experimentation.

The Revealing Science Of God (Dance Of The Dawn), from Tales From Topographic Oceans (1973)

…Topographic Oceans was such a challenge – from the construction, the rehearsal, then the studio. Jon and I were pushing this project along; the others were saying, ‘Are you sure? A double album and this is the first track?’ It needed Jon and me to say, ‘No no, it’s going to work!’ Side One and Four Ritual (Nous Sommes Du Soleil) would be so playable now, like an album in themselves. Those two sum up the project – the beginning and the end – and I choose the beginning. The Revealing Science Of God? It’s about where you put yourself: if you put yourself where people are saying, ‘Wait, I’m not sure about this,’ it might actually be a good thing. Then after the record came out the press slagged it, and Rick left. But then, everybody loved it…