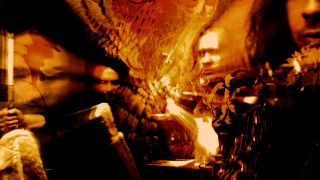 At first glance, the idea that any extreme metal band would even consider developing to the point where they could be considered prog is laughable.

But, when you give this even cursory consideration it all makes sense. Because the best bands at the furthest edges of the underground metal scene are not just excellent musicians, but also artists who are constantly looking to challenge both themselves and listeners. And nothing allows them to do this better than striding into progressive pastures. You can hear just how prog infiltrated the most extreme of metal bands right back in the 1980s, when the likes of Swedish black metal inniovators Bathory weren’t content just to be dissonant, but wanted to explore the outer reaches of what could be done. By the time the Norwegian black metal scene was ready to carve out its reputation in the early 90s, bands like Burzum, Carpathian Forest and Enslaved were taking on board Scandinavian folk influences, as well as the overt metallic ones. And as these bands developed an increasing musical prowess, so they became more adept at introducing different styles and inspirations, which meant many of the better black metal names were becoming more removed from the hardcore approach that had initially built their reputations. The trend has become more prevalent in more recent times. These days, unless you want to exist in a very small bubble of primitive, violent music, then the only way any aspiring band will be able to make their mark is to look beyond the obvious and be a little more adventurous. So, the scene is currently flowing with exciting talents, those who might have started out paying homage to the extreme metal style – be it death or black metal – but now barely even offer lip service to their roots. It’s these bands who have taken progressive metal into fresh areas, taking the pioneering spirit of those who refused to fit into comforting pigeon holes at the birth of the 90s and developing enticing new ideas. Here are 10 bands who represent the pinnacle and vanguard of this artistic phalanx. But they’re not even the tip of the iceberg. The progressive arena is witnessing an increasing desire from metalheads to, erm, use their heads.

The Sheffield band began in 1989 as a black/death metal band with symphonic hints But over the course of six albums so far, they’ve evolved into a pomp style band who nod towards extreme metal. Lyrically based in the world of dark fantasy, creating their own multiverse. An epic band in terms of musical approach and conceptual outlook.

The Norwegians started in 1991 as a full on black metal escapade. Within two years, they’d expanded their horizons and were writing longer compositions. But it was the 1997 album Eld that saw them turn into a progressive direction, a change in emphasis that was fully realised by 2000’s Mardraum.

From Romania, the band had an atmosopheric undertone from their beginnings in 1994. However, it was the conceptual album N Crugu Bradului in 2002 that captured the imagination, featuring four songs lasting nearly an hour. A number of line-up changes in the last four years has, if anything, accentuated Bunget’s links to classical and native folk richness.

Ved Buens Ende Never given due credit for their far-reaching attitude, from the start in 1993 these Norwegians introduced dissonant and atonal elements into their sound. Very much an experimental band, with the 1995 album Written In Waters anticipating much that’s happened since. The band split up in 2007, but their importance can only now be appreciated. Truly far-sighted.

The celebrated Swedes started as a fully fledged death metal band in 1990. But even by debut album Orchid in 1995, they were introducing acoustic elements and clean vocals. By 2001’s Blackwater Park, Opeth had become progressive metal masters. And since them, they’ve become icons in the prog world even more than in the metal sphere, where they’re still worshipped.

This Finnish lot were steeped in the ways of death when debut album The Karelian Isthmus came out in 1993. A year later, the album Tales From The Thousand Lakes showed them adding psychedelic touches. Since then, this is the area of music on which the band have concentrated. Last year’s Circle album showed a fine instinct for continued progression.

The French band are among the acknowledged masters of progressive metal over the past decade. Each release, from 2001’s Terra Incognita to 2012’s L’Enfant Sauvage has seen a distinct development in the band’s experimental leanings, without any loss of extreme power. It’s made them one of the leaders of the current prog metal era.

The Israeli band began in 1992 fusing doom and death metal. But they’ve slowly introduced an increasing interest in Middle Eastern style musical motifs. They’ve also incorporated a concept with each album, dealing with a meeting of extremes. Which is what they’ve been musically doing.

What began for three albums as a very traditional death/doom band has changed in the last few years to a more varied and atmospheric approach. The Finnish band really came into their own with 2009’s fourth album New Moon, and now have their own niche.

One of the younger bands in the progressive metal style, the Finns captured the imaginaiton with debut album Curse Of The Red River in 2010. Two years later, The Devil’s Resolve showed a capacity for retaining an extreme consistency, yet also delving into more diverse influences such as folk. It’s made them innovators.