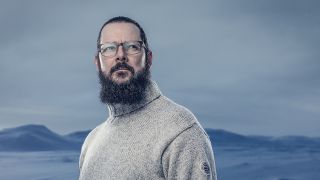 “I guess my introduction to music was getting a four-track recorder and just recording songs from my electronic organ when I was 10 or 11 years old,” smiles Ihsahn. “This triggered my interest in the recording process.”

The black metal legend turned obscure prog visionary’s musical journey began at an early age, and it’s certainly been a varied path for Ihsahn since then. He’s now on his sixth solo album, Arktis, which confirms his immense credibility in the prog genre. His unique style and vision evolved from his involvement in the media-fascinated grip of Norwegian black metal’s 1990s cult movement when he was just a teenager, and through successful collaborations with infamous Opeth producer Jens Bogren.

“I think that people who know the entire back catalogue of my music, starting from [previous band] Emperor days, can see that there was a development,” he muses. “I’ve always had this interest in pushing things forward and challenging myself to keep the process interesting. This includes having control over all of the production work and having my own recording studio.

“When we recorded the first Emperor album, we were really excited to go into the big studio in Bergen, but we were also really excited to hang out in the local rock clubs. Of course, I wasn’t 18 yet and as the youngest of the band, I couldn’t get into the bars. I got thrown out the first night for being underage, so that led me to being the one that spent more time in the studio with the engineer!

I like to take risks and I know I have people behind me who can handle it.

“The other guys had finished their parts so they could go out partying and I was stuck doing the vocals, chords and synths with the producer [laughs]. I guess that’s why I’ve always loved the recording part of the process.
“Working alone gives me a lot more creative freedom. It’s about creating a framework, to be able to focus the creative energy rather than an album being a compromise between a group of people.”

His latest solo album Arktis uses the beautifully isolated and hostile Arctic as a focal point. It acts as a metaphor for Ihsahn’s own solitary creative method, and for his musical variation of violent riffs and growls blended with wistful melodies and clean vocals.

“I think I picked up on all of the experiences I’ve had over the years and put a lot of them into this album,” Ihsahn says. “It’s very formulaic content, instead of simple song structures, in order to make it interesting. This is my main idea every time I set the parameters for a new album. In fact, I write up all of these ideas before I even start to write the album [laughs]. This is just my way of keeping myself excited about the music.”

Ihsahn’s first three solo albums, The Adversary, angL and After, were a heavy progressive metal trilogy, and an ambitious project for the musician.

“I started out very organised by deliberately making a trilogy because I wanted to build a foundation for myself musically,” he explains. “I gave myself three albums to prove myself, rather than just one, and I just took it from there. By the time I had done the third album, After, it was time for me to reset the parameters and do something completely different.”

This paved the way for Ihsahn’s more outlandish and experimental work Eremita in 2012, and the following year’s improvised masterpiece Der Seelenbrechen.

“I was coming to a point where all of the control elements when recording a metal album in your own studio didn’t leave much room for improvisation,” he says about his yearning to be more experimental. “The last album was obviously very instrumental and the whole idea was to approach the music the way Diamanda Galás and Scott Walker would have. Those artists just went by pure instinct, in very free form, and then saw what happened, without any idea of the atmosphere they wanted to create.”

In contrast, Arktis is a carefully sculpted and edgy mix of sonically varied prog songs. From the glacial electronic anthem South Winds to the pounding 80s guitar riffs in Until I Too Dissolve, each track has an element of surprise.

“I thought it would be an interesting experiment to approach this album in a very traditional ‘rock songwriting’ craftsmanship style. I didn’t want it to sound like that, but to have that kind of state of mind when making the songs.

“Some people have reacted to the fact that there are some electronic songs and some 80s-style songs, but this is actually coincidental to the main idea. Until I Dissolve started with the riff, which is very 80s, and that was the basic idea, so I wrote the song according to that, and the atmosphere of the riff dictated how I would present the song.”
The album’s striking cover is a powerful, minimalist image of a man trudging through the icy Arctic glaciers, edited by graphic designer Ritxi Ostáriz.

If it was up to me, Emperor would sound like Ihsahn today.

“All of the artwork is photography based on the Norwegian explorer Fridtjof Nansen, who was the first to attempt to reach the North Pole in the late 1800s,” explains Ihsahn. “He documented his journey through photography and I was given permission by the Norwegian National Library to use the images.”

The Scandinavian explorer was famous for embarking on the first journey to the North Pole by skiing, with minimal equipment. His testament of endurance shares a parallel with Ihsahn’s musical exploration on the album, with tracks like My Heart Is Of The North posing as the national anthem.

“I just wanted to go so totally out from any kind of context, with undefined goals, in such a harsh environment, with such enthusiasm and courage. This is something that resonates well with me.”

Much like his extreme music peers Ulver, Enslaved and Opeth, Ihsahn is sometimes conflicted by the use of labels when referring to his new-found musical genre.

“I’ve been put into the prog category but this wasn’t deliberate,” he says. “Sometimes I feel bad about it because I know people who are definitely fully progressive, like Mikael [Åkerfeldt] from Opeth, for example. Opeth is a very progressive band and he obviously knows all of the references. These guys are like an encyclopaedia of prog history. But for my own sake, it’s more the case of wanting to expand from what I did before. I don’t have a long‑term relationship with obscure progressive music. Sometimes I feel like I’m put in that category because people assume I have a great overview over all of my experimental music. Perhaps my music is progressive in a way, if that makes it easier to describe.”

Having successfully introduced prog elements into black metal in the 90s, he’s comfortable balancing his respectable reputation from the old school Emperor days with the ongoing Ihsahn revelation.

“This is not me blowing my own trumpet, but when we started Emperor, people did not feel as strongly about Norwegian black metal. We were teenagers and already pushing the extreme to the best of our ability with our music. We wanted to continue that journey and continue developing that inspiration. In fact, I would say our last album, [2001’s] Prometheus: The Discipline Of Fire & Demise, was the most progressive of them all. In practical terms, it was my first solo album because I wrote and recorded it almost entirely on my own. So we were going in that direction anyway, and if it was up to me, Emperor would sound like Ihsahn today. I don’t think that was the case for the other guys and this is why we naturally split apart.”

Despite Ihsahn’s lone wolf status, the reoccurring collaborators add an extra dimension to the singer’s complex vision, most notably on the latest album.

“I have a stable group of people I can rely on, and I’m very lucky to have such talented people in close proximity. Sometimes it’s cool to invite someone new to add that extra spark. For the most part I do the writing myself, so it’s so subjective. I invite them in order for them to contribute something I cannot do myself and it feels very refreshing to do so.”

Arktis features vocals by Jørgen Munkeby from Shining, Matt Heafy from Trivium and Einar Solberg from Leprous, who also happens to be Ihsahn’s brother-in-law.

“Jens Bogren always interprets what I pitch to him in such a great way,” he says. “Having someone like that behind me creates a very solid environment for me to go further with the music. I like to take risks and I know I have people behind me who can handle it [laughs].”

Ihsahn’s ability to blend his intense musical roots on his darkened prog journey is a testament to his self-confidence as an artist and his proficiency in musical durability. Already toying with “two parallel ideas out of two different extremes” for his next album, the Norwegian forerunner will surely continue to boldly amaze and captivate the alternative prog scene.

“I’ve taken so much crap or praise for the same albums, simply depending on opinion and perception, so regardless in that sense, I would say that yes, I am quite comfortable doing what I am doing today.”

Arktis is out now on Candlelight/Spinefarm. See Ihsahn’s website for more information.