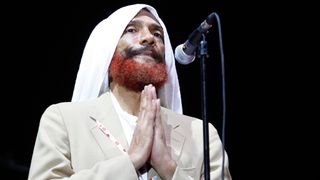 Bad Brains frontman HR – aka Paul Hudson – has been diagnosed with a rare headache disorder which leaves him living in “almost constant pain.”

His wife Lori Hudson, who is also his full-time caregiver, has launched a $50,000 crowdfunding campaign to help pay for medical expenses and care.

She says: “He has a neurobiological disorder and has also had severe headaches for years, but the headaches have gotten progressively worse. In November, he began living with almost constant pain.

“He has been diagnosed with a rare type of headache called SUNCT, a trigeminal neuralgia that is similar to cluster headaches. There is no known cure and no reliable medical treatment. To give you an idea of what he’s dealing with, cluster headaches are nicknamed ‘Suicide Syndrome.’

“The headaches come randomly, with no warning, at all hours of the day and night; but for him, they are much worse at night. The intensity of the headaches is so great that he yells, cries out, groans, and sobs – repeatedly, every few minutes, for most of the night.

“He can’t work. He has no quality of life. If you call him and ask how he is, he will say, ‘Everything’s okay,’ because that’s just how he is. But everything is not okay.”

Hudson says that, in the past six months, HR has stayed overnight in the hospital, visited the emergency room twice, consulted neurologists and has lost weight from the medication he is using. They’ve arranged for him to visit a specialist headache centre in May, but it’s not fully covered by health insurance.

She adds: “I work a full-time retail management job with varying shifts. I manage HR’s calendar and business as best as I can. I’ve been trying really hard to work on extra projects to bring in some extra money, which is very slow going. I take care of the apartment, the car, the bills, HR’s doctor appointments, everything.

“Now I can’t sleep because my husband is crying out in pain all night. On top of the physical stress of shift work and not getting enough sleep, the emotional and psychological stress of watching him be in pain and not being able to do a damn thing about it is wearing me down.

Meanwhile, Bad Brains have raised $42,000 of their $100,000 crowdfunding goal to help guitarist Dr Know with treatment costs and care after he suffered a cardiac arrest in November. He is expected to make a full recovery after he was initially given a 5% chance of survival.

Donations to HR’s health fund can be made via GoFundMe.