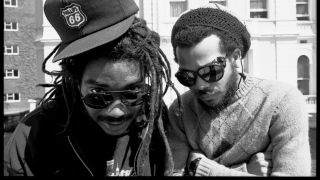 Punk icons Bad Brains unleashed their now iconic opus, 'Rock For Light', on this day in 1983. Here are ten reasons they are quite rightly regarded as one of the greatest bands of all time...

They Inspired Every Hardcore Band You Love.

Just ask Ian Mackaye or Henry Rollins why they decided to start a band. Chances are they’ll tell you it was from watching these guys. No Bad Brains = No Minor Threat, Black Blag or Fugazi.

You’ve seen The Dillinger Escape plan or Letlive going apeshit onstage before no doubt and thought, ‘I’ve never seen that before’. This is probably because you weren’t around for Bad Brains early all-flipping, all-smashing, all-annihilating shows. Genuinely terrifying.

Back in the 70s, punk was all about a snotty ball of spittle screamed straight into your face. BB introduced the sounds of reggae and jazz into a genre that, up until that point, had little or no interest in musical variation.

They Are Super Positive

Most punk bands around this time were spreading anarchy and anger, but Bad Brains’ mixture of thought-provoking lyricism and uplifting positivity was certainly a tonic for those who found hardcore too nihilistic. Check out ‘Attitude’ for proof.

Dr. Know Is A Proper Shredder

So punks can’t master their instruments, right? Wrong. BB guitarist Dr. Know is a shredder of the highest order. This isn’t three chords and the truth, more like a blur of warp speed wails and squeals… and the truth.

They Fought The Racist Knuckleheads… And Won

Punk in the late 70s was the domain of the angry, white male. So you can imagine the immediate response from some of the more militant punks when a group of chilled out Rastafari arrived on the scene. After the initial scoffing and backlash, the racists soon shut up when the saw just how killer the band were.

They Were Produced By A Beastie Boy

When the original line up of Bad Brains reformed in 2005 their comeback album, ‘Build A Nation’, was overseen by the late, great Adam Yauch, AKA MCA, of The Beastie Boys, who proceeded to go into full on fanboy mode as he worked with his heroes.

They Never Really Go Away

Yeah, they’ve split up many times over the years, but you can never rule out the possibility of seeing the band up on stage at any given time. In fact, in March photos were posted on the band’s Facebook page of them working in the studio, hinting that there may be some new material coming soon. Which is nice.

They might not release an album every year, but the members of BB are certainly busy chaps. Working with the likes of Henry Rollins on a cover of the MC5 classic ‘Kick Out The Jams’, recording with former FNM vocalist Chuck Mosley and appearing on releases from everyone from P.O.D. to… erm… rapper Lil’ Jon.

They Quit On Jazz To Make Punk And Metal

Bad Brains actually started as a jazz fusion quartet before discovering, and falling in love with, punk rock. Once they’d perfected that they decided to add a large dose of funk metal to their sound for 1986’s ‘I Against I’ album. See you later, jazz noddlers!