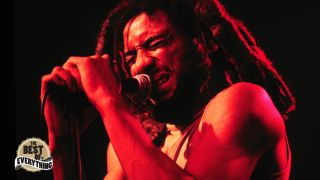 The first time I heard Bad Brains was probably in 1993. One of my bandmates at the time played me I Against I off the I Against I record, and I remember sitting there listening and really taking it in. I didn’t have a language for the kind of music they were doing, especially that record because it’s so diverse, and when I found out that they were an all-black Rastafarian punk band, that kind of blew my mind.

I was already kind of a fan of reggae music, and definitely a huge hardcore and punk kid, and after hearing I Against I for the first time I dug deep; I went back and listened to all their records from the first one [Bad Brains, 1982] all the way through to Quickness [1989]. What really struck me overall was the reggae stuff they were doing because it was just so different seeing a hardcore band go out and give it their all then slow it right down and play reggae music, and have all the punks actually swinging and moving along.

So as a band they really influenced me a lot, and I actually got into reggae music because of Bad Brains. I started going to reggae shows and buying reggae records all because of them. It wasn’t just the way that they sounded either, it was the way that they looked, so iconic and confident and badass. That really struck a chord with me.

I think the video of them playing live at CBGB’s in 1982 might be the pinnacle of the energy of that band. I don’t think anyone can touch that performance. It’s one of my favourite performances of any genre, period. Later on, Killswitch Engage actually got to open up for Bad Brains and Cro-Mags and I got to see a later rendition of the band up close and personal. It wasn’t quite as energetic as the videos you see on YouTube from those early performances but it was still such an honour.

I really don’t think I’d be who I am today if it wasn’t for Bad Brains. So here are my top 10 songs by the band…

I LUV I JAH (Bad Brains, 1982)
This is a straight-up slow roots reggae song. There’s nothing fast or heavy about it at all. I just love the passion behind it – it’s a prayer song to Jah. Whenever I DJ punk nights I play this song to get a reaction, either so people ask what the hell I’m doing or who it is, at which point I proudly say, ‘It’s the Bad Brains.’ That correlation between reggae and punk is everything to me.

SOUL CRAFT (Quickness, 1989)
This one’s just a nice modern hardcore song with a groove, and Quickness is where they really honed that sound. This is a classic song, even just the way it starts with Doc [Dr. Know, guitarist] humming the melody of the song before it kicks in. And as soon as it does kick in all hell breaks loose in the pit.

HOUSE OF SUFFERING (I Against I, 1986)
This is another classic Bad Brains song with great lyrics, rhythm and groove. When you get into a new scene you often hear all these bands that sound quite similar and what was always so great about Bad Brains, for me, was that they always stood out from their peers – both sonically and visually. They’re probably my favourite hardcore band of all time, and I love and adore Minor Threat, Black Flag and Dead Kennedys, but Bad Brains’ diversity and what they stood for made them untouchable in my mind.

SAILIN’ ON (Bad Brains, 1982)
I love the vibe of this song. H.R. seems to be saying in so many words, ‘I don’t care, man. I’m chillin’ and relaxin’ no matter what you think about me or what’s going on in the world – I’m sailin’ on.’ You can hear the confidence in his voice and I love the idea of him being totally in his own world, and this song really captures that for me.

JAH LOVE (I & I Survived, 2002)
Jah Love is the first track off the dub record that they made, which is just 12 tracks of pure dub music. I’m a huge dub fan and I love dub music, so I love the trippy sound that they explored with this album. They just chopped up a load of old Bad Brains songs and made them into dub songs, and it’s great.

SACRED LOVE (I Against I, 1986)
This is a fairly famous song, because the story goes that H.R. got arrested for possession of marijuana and wound up in jail whilst the band were trying to finish off the record, and what they did was they got him on the phone in prison to sing his parts down the line. So all the vocals you hear on this song were sung through a prison phone, and it sounds a certain way because of that. Lyrically, it’s a great song too. It’s a true love song, and I just love the fact that he sung it from prison.

BIG TAKE OVER (Bad Brains, 1982) The slow rumbling of the drums in the intro to this song get harder and harder as it kicks in, which along with the feedback creates this real tension. I’ve seen footage of the band playing this song live back in the day and the audience goes totally nuts, just from the sound of those drums. It’s got the rhythm, it’s got that groove, and when H.R.’s vocals come in over the top of it you just want to go insane. I also love the title, which comes from an old Rastafarian phrase that was born during the ‘70s when disco was making an appearance in Jamaica; the Rastas didn’t like it so they’d go to the discos and kick out the DJ and put on reggae music, and they’d call it the Big Take Over.

SHE’S CALLING YOU (I Against I, 1986)
This is more of a rock song than a hardcore or punk song, and I think that’s what makes it so great. And the emotion behind H.R.’s voice on this one is so powerful. Rumour has it that a lot of ladies loved H.R., for obvious reasons. He was the frontman of an amazing band and he had a lot of charm. But in this song it sounds like he’s longing and lonely, and I love the melancholy in is voice. It’s a beautiful sappy love song but I dig it, and it’s part of their catalogue and their legacy, and they were able to pull those kinds of songs off. In fact, the Washington D.C. scene that Bad Brains originally came from later became like the proto-emo scene, where bands played emotional hardcore music, and I think they paved the way for all of those bands because they were never afraid to wear their heart on their sleeve.

LEAVING BABYLON (Bad Brains, 1982)
This is strictly a reggae song, and what I love about it is it’s H.R. talking about the next life. When a Rastafarian says ‘Babylon’ they’re talking about the political system, be it the police or the corrupt empire of the Roman Catholic church, and in this song he’s basically saying, ‘We’re outta here! You guys do what you want here on Earth, we’re leaving Babylon.’ To me it’s the ultimate ‘fuck you’ to the world, and just that Rasta pride that no matter what happens they’ve got their heaven and they’ve got their Jah. I love this song.

ATTITUDE (Bad Brains, 1982)
This is the song where they first talked about PMA, which stands for Positive Mental Attitude. I actually have that tattooed on my leg, and this song has been an anthem for me since I was a teenager; whenever I’m in a bad mood or I’m having a shitty day I hear this song in my head. It’s such a badass song, but it’s about being positive, and that’s kind of my mantra as a lyricist. Everything I’ve done since I was a teenager up until now, you can draw a line all the way back to that PMA, so this song has influenced me deeply, and it’s probably my favourite Bad Brains song of all time.

Killswitch Engage play the main stage at Download on June 10. For the full line-up and information, visit the official website.

Who is the real Jesse Leach?