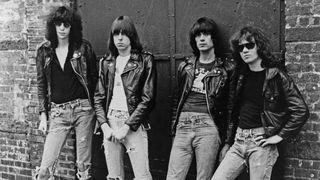 Here are all the things Joey, Johnny, Dee Dee , and Tommy gave us before they ascended to Cretin Heaven.

Ripped Knees
Before the Ramones, it wasn’t that cool to have holes in your clothes. Joey and his torn-up Levis made it hip to be so broke you couldn’t afford a needle and thread

Punk Rock
Sure man, the Pistols chewed up all the press in ’77 with the safety pins and the cuss words, but the Ramones were writing two-minute razorwire bummer jams (with a junkie bass player, even!) back in 1974.

Blowing Up Your High School
Rock n ‘Roll High School is one of the greatest movies ever made. That’s just a fact. There are many reasons for this, not the least of which is that it “stars” the Ramones (who mostly eat pizza and mumble) who help everybody’s favourite teenage crush Riff Randell (PJ Soles) save rock’n’roll by literally blowing up the whole fucking school (spoiler alert). Which is an enduring fantasy of every sixteen year old at some point or another. It might be the most gratifying moment in all of cinema.

Bad haircuts
Johnny Ramone had to have a few dark nights of the soul over the years, lamenting his decision to utilize Three Stooges-esque bowl haircuts as the band’s key image. I mean, he had to look like a numbskull in public for decades. But it was a cunning move, really. Dare to be dumb. You could see that guy coming from a mile away. Basically every band in the first half of the 80s followed his lead. There would be no Flock of Seagulls without Johnny Ramone. A woeful example, but you know what I mean.

CBGB
The club existed before and after The Ramones, sure. But it didn’t really matter before them, and it lived in their shadow until it finally shuttered in 2006. The grubby little dive-bar of a club became the epicentre of New York punk rock in the mid 70s and the Ramones ruled the roost. Hard to say who made who, but rock’n’roll would be a lot less fun without either.

One Big Happy Family
If you ever peeked behind their tattered curtain, you’d see the rot and resentment that fuelled The Ramones for decades. But on the surface, the Ramones presented themselves as a gang, a family, an unbreakable chain (unless you were the drummer or the bass player). Punk rockers loved it, and it became standard issue to adopt the name of your band as your last name. Still is. PS my apologies if you really did think they were brothers. I did too until about 1982.

Ronnie Spector is cool, always
There is a strong argument for the Shangri-las and the Ronettes being the real pioneers of punk. Certainly the girl groups were a major influence on both the New York Dolls and The Ramones. But while their music faded into nostalgia in the 70’s, Joey never forget ‘em, and in the late 90’s, Joey produced an EP for Ronnie and sang a duet of Bye Bye Baby with her, neatly bridging the gap between the 60’s and 70’s and making the Ronettes hip again.

Phil Spector was nuts, always
Speaking of the Spectors and the Wall of Sound, in 1979, the Ramones made their last real stab at commercial success by employing Phil Spector as the producer for their End of the Century album. It didn’t work – if anything, the album sounds flatter than their earlier output – but the concept was pure poetry and the stories that resulted were as weird and alarming as you’d expect. For years, Dee Dee swore Spector held them hostage at gunpoint until they nailed the recording for Rock N’ Roll High School.

Ramones t-shirts
There is only about a 50⁄50 chance that the next person you see wearing a Ramones tee actually knows who they are. There are way more Ramones shirts than Ramones records out there. And if everybody who owns a Ramones shirt actually paid the band for ‘em, they would’ve been traveling in private jets all these years. Separate ones. But the Ramones eagle emblem shirt is the most iconic rock tee of all time and the ultimate rock n’ roll accessory.

Not Liking Shit
Before the Ramones, 98% of all rock songs were about love. The rest were about drugs. The Ramones changed all that. They got real, man. There were a lot of things that they didn’t like to do, so they wrote songs about them. I don’t wanna walk around with you, I don’t wanna go down to the basement, I don’t wanna grow up. And they never did, either.

Loony cartoony
One of the Ramones’ biggest influences was the bubblegum pop explosion of the late 60’s. Almost every aspect of the Ramones sound and image has roots in the plastic fantastic world of the yummy yummy and the chewy chewy. They brought the fun, the frivolity, and the reckless teenage heroism of bubblegum to the sick, sick 70’s. They were, essentially, the punk rock Archies. The fact that there was never a Ramones Saturday morning cartoon remains one of life’s most confounding mysteries.

Republican rock stars
Hey, not everything they gave us was good. Johnny Ramone loved Ronald Reagan, which infuriated left-leaning Joey. And that only egged Johnny on. He spent the next thirty years spewing oddly conservative viewpoints, confusing and confounding punk rockers, the most rabidly anti-Reagan group of people on Earth. Johnny’s right-wing rants paved the way other Republican rockers like Ted Nugent, Dave Mustaine, and Kid Rock. You know, the genius club.

One of Us
Before Joey Ramone, rock frontmen were almost universally handsome, golden-god types, from Elvis to Jim Morrison. Joey was not that. Joey was gangly and greasy, awkward and unsightly. And guess what? Chicks still loved him. Joey made it cool to be a freak. In fact, he championed it. Joey Ramone, king of the weirdos.

Hi-top Converse sneakers
There was a time they were used for basketball, not punk rock. True story.

Two-minutes is all you need By the time the Ramones came around, rock had “evolved” into bloated, over-produced prog and clanging, meandering ‘art-rock’ and plaintive, mopy singer-songwriters. Well, fuck all that. Thanks to the Ramones, rock n’ roll went back to it’s primitive, high-impact origins, reminding everybody that all you really need is two chords and a grudge to make a great rock song.