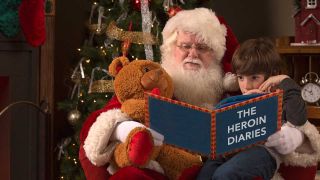 It’s cold outside and all you want to do is sit down in front of the fire with a good book. But wait. What the hell do you read?! There are millions of pages printed with words about music out there, and it’s hard to know where to start, but we've got you covered.

We’ve picked the best books for rock and metal fans to get for Christmas. So if you’re buying for a friend or are stuck for things to ask Santa for, look no further than the stories below. Amazon are delivering until Christmas Eve this year, so you've still got plenty of time to pick up a last minute present.

Burning Down the Haus: Punk Rock, Revolution, and the Fall of the Berlin Wall by Tim Mohr

Amazon says: This secret history of East German punk rock is not just about the music; it is a story of extraordinary bravery in the face of one of the most oppressive regimes in history. Rollicking, cinematic, deeply researched, highly readable, and thrillingly topical, Burning Down the Haus brings to life the young men and women who successfully fought authoritarianism three chords at a time--and is a fiery testament to the irrepressible spirit of revolution.View Deal

Sticky Fingers: The Life and Times of Jann Wenner and Rolling Stone Magazine by Joe Hagan

Amazon says: Sticky Fingers is the story of how one man's ego and ambition captured the 1960s youth culture of rock and roll and turned it into a hothouse of fame, power, politics, and riches that would last for fifty years. Drawn from dozens of hours of interviews with Jann Wenner, who granted Joe Hagan exclusive access to his vast personal archive, this biography reveals how Wenner manufactured an unforgettable cultural mythology in story and image every other week for five decades.View Deal

We Are The Clash: Reagan, Thatcher and the Last Stand of a Band That Mattered by Mark Andersen

Amazon says: We Are The Clash is a gripping tale of how the band - fractured by its Top 10 success - fought to reinvent and purify itself as George Orwell's 1984 loomed. This extraordinary effort crashed headlong into a wall of internal contradictions, personal tragedy, and rising right-wing power as personified by Ronald Reagan and Margaret Thatcher. While the world teetered on the nuclear abyss, British miners waged a life-or-death strike, and tens of thousands died from US guns in Central America, The Clash launched a desperate last stand, shattering the band just as its controversial final album, Cut the Crap, was emerging.View Deal

All Gates Open: The Story of Can by Rob Young

Amazon says: CAN were unique, and their legacy is articulated in two books in this volume with the depth, rigour, originality, and intensity associated with the band itself. It is illustrated throughout with previously unseen art, photographs, and ephemera from the band's archive.View Deal

Amazon says: Read & Riot is structured around Nadya's ten rules for revolution (Be a pirate! Make your government shit its pants! Take back the joy!) and illustrated throughout with stunning examples from her extraordinary life and the philosophies of other revolutionary rebels throughout history. Rooted in action and going beyond the typical "call your senator" guidelines, Read & Riot gives us a refreshing model for civil disobedience, and encourages our right to question every status quo and make political action exciting--even joyful.View Deal

For The Sake Of Heaviness: The History Of Metal Blade Records by Brian Slagel

What Does This Button Do? by Bruce Dickinson

Amazon says: In What Does this Button Do? Bruce contemplates the rollercoaster of life. He recounts – in his uniquely anarchic voice – the explosive exploits of his eccentric British childhood, the meteoric rise of Iron Maiden, summoning the powers of darkness, the philosophy of fencing, brutishly beautiful Boeings and firmly dismissing cancer like an uninvited guest. Bold, honest, intelligent and funny, this long-awaited memoir captures the life, heart and mind of a true rock icon, and is guaranteed to inspire curious souls and hard-core fans alike.View Deal

Meet Me in the Bathroom: Rebirth and Rock and Roll in New York City 2001–2011 by Lizzy Goodman

Amazon says: In this fascinating and vibrant oral history, acclaimed journalist Lizzy Goodman charts New York's explosive musical transformation in the early 2000s. Drawing on over 200 original interviews, Goodman follows the meteoric rise of the artists that revolutionised the cultural landscape and made Brooklyn the hipster capital of cool-including The Strokes, The Yeah Yeah Yeahs, LCD Soundsystem, Interpol, and Vampire Weekend.View Deal

A History Of Heavy Metal by Andrew O’Neill

Amazon says: Award-winning comedian and life-long heavy metal obsessive Andrew O’Neill has performed his History Of Heavy Metal comedy show to a huge range of audiences, from the teenage metalheads of Download festival to the broadsheet-reading theatre-goers of the Edinburgh Fringe. Now, in his first book, he takes us on his own very personal and hilarious journey through the history of the music, the subculture, and the characters who shaped this most misunderstood genre of music.View Deal

Sonic Youth Slept On My Floor: Music, Manchester, and More: A Memoir by Dave Haslam

America 51: A Probe Into The Realities That Are Hiding Inside ‘The Greatest Country In The World’ by Corey Taylor

Amazon says: The always-outspoken hard rock vocalist Corey Taylor begins America 51 with a reflection on what his itinerant youth and frequent worldwide travels with his multiplatinum bands Slipknot and Stone Sour have taught him about what it means to be an American in an increasingly unstable world. He examines the way America sees itself, specifically with regard to the propaganda surrounding America’s origins (like a heavy-metal Howard Zinn), while also celebrating the quirks and behaviour that make a true-blue American.View Deal

Amazon says: In honour of the ten-year anniversary of The Heroin Diaries, Nikki Sixx’s definitive and bestselling memoir on drug addiction is reissued with exclusive new content. This shocking, gripping, and at times darkly hilarious memoir explores Nikki’s yearlong war with a vicious heroin addiction. Now more than ever, with opioid addiction ravaging our country and rising by twenty percent in the past year alone, Nikki’s story of both his descent into drug-addled decay and subsequent recovery and transition into a rehabilitation advocate are now more relevant than ever.View Deal

As Time Goes by Derek Taylor

Amazon says: Derek Taylor's iconic memoir is a rare opportunity to be immersed in one of the most whirlwind music sensations in history: Beatlemania. As Time Goes By tells the remarkable story of Taylor's trajectory from humble provincial journalist to loved confidant right at the centre of the Beatles' magic circle. In charming, conversational prose, Taylor shares anecdotes and reminiscences so vivid and immediate that you find yourself plunged into the beating heart of 1960s counterculture. Whether watching the debut performance of 'Hey Jude' in a country pub or hearing first-hand gossip about a star-studded cast of characters, Taylor's unique narrative voice forges an autobiography like no other. Reissued here in a brand new edition with a foreword by celebrated writer Jon Savage, this long-admired memoir is a cult classic of the genre awaiting a new readership.View Deal

Please Kill Me: The Uncensored Oral History of Punk by Legs McNeil and Gillian McCain

Amazon says: A contemporary classic, Please Kill Me is the definitive oral history of the most nihilistic of all pop movements. Iggy Pop, Richard Hell, the Ramones, and scores of other punk figures lend their voices to this decisive account of that explosive era. This 20th anniversary edition features new photos and an afterword by the authors.View Deal

On Power: My Journey Through The Corridors Of Power And How You Can Get More Power by Gene Simmons

Amazon says: Inspired by Niccolo Machiavelli’s The Prince, Simmons offers his unique take on the dynamics of power in every realm of life, from the bedroom to the boardroom, to the world of rock, celebrity, and social media, to politics. With one-of-a-kind anecdotes from his life and career, as well as stories from historical and contemporary masters of power, including Winston Churchill, Napoleon Bonaparte, Warren Buffett, Michael Jordan, Oprah, and Elon Musk, Simmons crafts a persuasive and provocative theory on how the pursuit of power drives civilisation and defines our lives.View Deal

Amazon says: In Experiencing Black Sabbath: A Listener’s Companion, musician and scholar Nolan Stolz leads the reader through Sabbath’s 20 studio albums and additional songs, offering a close look into their music and the storied history of the band. Along the way, Stolz highlights often-overlooked key moments that defined Sabbath’s unique musical style and legacy. Band members’ own words illuminate certain aspects of the music, and Stolz makes connections from song to song, album to album, and sometimes across decades to create an intricate narrative of the band’s entire catalogue.View Deal