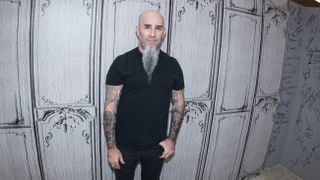 Anthrax mainman Scott Ian says metal and geek culture started to come together around the time Kiss burst onto the scene.

Speaking to the Metal Hammer: In Residence show on Spotify alongside astrophysicist and metalhead Dr Matt Taylor, Ian recalls falling in love with Kiss in the 1970s while slightly older kids shunned them.

Ian is a big fan of comic book culture and TV, having appeared in both The Walking Dead and Game Of Thrones as an extra.

Ian says: “Going back to the 70s as a kid, the geekdom thing wasn’t a part of heavy metal. Overall, the kids a little bit older than that me were listening to metal, the 16-year-olds when I was 13 that loved Zeppelin and Sabbath and Aerosmith, they weren’t into geeky stuff at all.

“They were into smoking weed and doing drugs and drinking and listening to music. Me and my friends, we liked those bands too, but we liked Kiss as well – who all those older kids hated.

“Kiss was kind of like that bridge, like, ‘These guys are like a horror movie and a comic book and they play rad music.’ That was kind of my gateway drug to, ‘Hey, this all works together.’”

Dr Taylor, who works on the Rosetta spacecraft project, says he believes metal and science have a natural affinity.

He says: “Talking to people, it’s something that people don’t perceive I should be doing. I shouldn’t be a metalhead and a scientist. But it’s weird that it’s prevalent in my business. There are a lot of people who like heavy metal. It’s part of science.

This month, Slipknot frontman Corey Taylor also discussed how he believes metal fans are often smarter than fans of other genres.

The full interview with Scott Ian and Dr Matt Taylor features in the latest episode of Metal Hammer: In Residence which is available via Spotify. It also features conversations with Alice Cooper and Of Mice & Men.